Home Islam Islamic values The Names and details of the children of the Holy Prophet Muhammad... 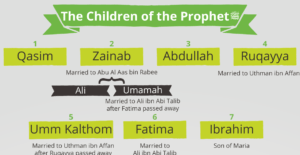 During the life of the Holy Prophet, he had daughters and sons, the first of them was Hazrat Al Qasim R.A. From this he took the name, Abu’l Qasim. It is believed that the firstborn died in his childhood; however, it should also be noted that it is said that he was old enough to ride a horse before his death.

After the daughters, a son named Abdullah was born to the Holy Prophet (peace be upon him). The birth of Abdullah is something which has been debated for quite some time now. Some people claim that he was born before the Holy Prophet became a Prophet while others claim that the son was born after Prophethood had been granted to Muhammad (peace be upon him). In addition to this dispute, it is also disputed whether he was called Al Tayyib or Al Tahir or whether these were different children altogether. The correct view is that these were all nicknames given to him.

All these children of the Holy Prophet (peace be upon him) were born from the same mother that was Hazrat Khadija (peace be upon her) and that he never had any children from any other wife.[irp]