The word fountain had been initially derived from the Latin word Fons. Fons means something that throws a jet of water into the air. This can be either to supply drinking water or purely as a decorative purpose. Below you can find a list of some of the tallest fountains from all around the world. Here you have it, the tallest fountains from around the world. If you are ever in any of the cities mentioned below it would be a great idea to go and check out these wonderful fountains. Once again the Kingdom of Saudi Arabia has the esteemed position of number 1 on yet another list.

At no.1 we have the King Fahad Fountain. The King Fahad Fountain is also known as the Jeddah Fountain and is the tallest fountain in the whole world. This fountain was created in 1980 and raises the water to about 260 meters or 853 feet above the sea level. This magnificent view can be easily seen from anywhere in Jeddah city. The fountain uses the salt water from the Red Sea and does not waste fresh water.[irp] 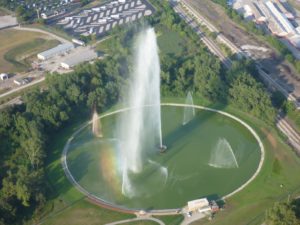 Gateway Geyser Fountain is second on our list of tallest fountains. This fountain is located on the Mississippi river gateway and had been constructed in 1995. The fountain shoots the water 630 feet high in the air.[irp]

Third, on this list, we have the KPT Fountain Karachi. The KPT Fountain in Karachi was constructed in 2005 to add to the beauty of the coastal line. On matters of special occasions / national celebrations, the fountain serves as a backdrop for an exquisite firework display. The KPT Fountain can shoot water almost 620 feet into the air, above sea level. The Karachi KPT Fountain was initially aimed to be a visual pleasure to watch for all those who went to the coastline. A special boat ride is also available which takes the people right next to the KPT Fountain which often leaves the people drenched yet amazed.

Fourth on this list, we have the Arizona Fountain. The Arizona fountain is in Arizona as the name states. This fountain is considerably older than the other fountains on this list, as it was created in 1979. The fountain can shoot water up to 560 feet above the sea level.[irp] 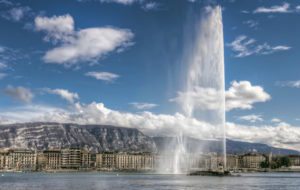 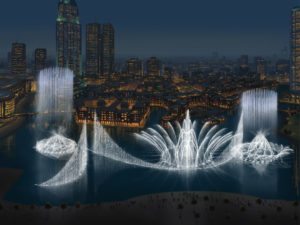 A special mention on this list would be the beautiful dancing fountain in Dubai located next to the Burj Khalifa. The unique fountain has many variations which often change according to the beat of the music or the type of music being played. The fountain dances on everything from Michael Jackson to traditional local Arabic songs from the UAE.