Home Social Issues Hajj & Umrah What are Fard, Wajib, and Sunnah of Hajj?

As Muslims, we must be aware of the Fard, Wajib, and Sunnah of Hajj. Hajj should be performed with full knowledge so that no mistakes are made during it.

There are three fard acts that a Hajj pilgrim shall perform. The performance of Hajj is not complete righteously until the three Fard is accomplished properly.

Assuming ihram for Hajj purpose is the very first fard of Hajj upon a pilgrim. After wearing the Ihram, the best Dhikr is Talbiya.

Performing a Tawaf al Ziyarah or Tawaf al Ifada at any time after getting free from sacrifice, shaving your head, and changing your Ihram from the morning of the 10th Dhul Hijjah till the sunset of the 12th Dhul Hijjah is fard of Hajj. However, you are not required to wear Ihram for Tawaf al Ifada. 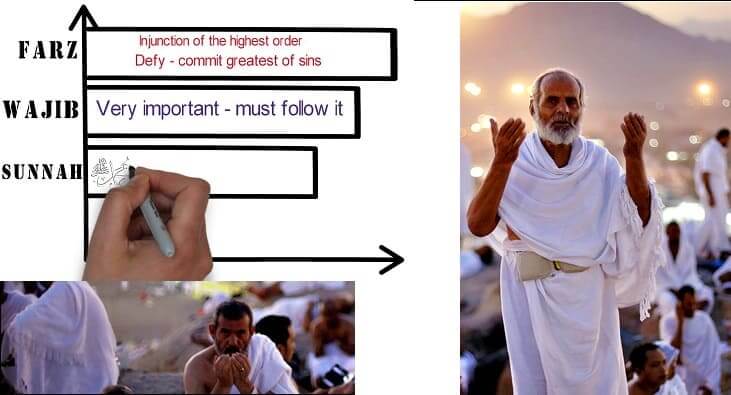 A Hajj pilgrim shall bear in mind that there are 6 Wajib acts of Hajj. If any of these wajib acts are left intentionally, Hajj will remain valid but a penalty in the form of sacrifice of an animal or a sadqa has to be paid.

However, if anyone leaves a wajib of Hajj without an excuse, it is a sin that cannot be overcome through any Sadqa or Qurbani.

Performing Saee between Safa and Marwah mountain is another wajib act of Hajj. It is generally performed along with Tawaf Ziyarah.

Pelting at the Jamarat is one of the wajib acts of Hajj. It is important to note that you can only go for pelting after the Fajr prayer of the 10th of Dhul Hijjah.

One who is performing Hajj Qiran or Hajj Tamattu has to offer an animal sacrifice i.e. a wajib act of Hajj. Recommended: How many types of Hajj are there in Islam?

Once you have performed all of the above-mentioned acts of Hajj, you are required to shave or cut the hair of the head which is another wajib act of Hajj.

There are many sunnah acts of Hajj that every Muslim should try to follow. However, there is no sin in leaving any sunnah act of Hajj.

Difference between Fard and Wajib

Both the Fard and Wajib acts of Hajj are obligatory on pilgrims. The only difference is that leaving a Fard act (intentionally or unintentionally) will nullify the performance of Hajj while sacrificing an animal can compensate for leaving a wajib act unintentionally.