Long life is also a blessing from Allah. Very recently, a Saudi man named Khunaifer Al Dhiyabi was found whose age was about 111 years according to his national identity card. But according to his saying he was more than 120 years old.

While sharing the secret of his long life, he said, “his daily diet usually consists of Dates and camel milk and he walks in the desert sand daily.”

He prescribed the young ones of this time that if they wanted to live a long life they should start eating healthy and hygienic food and should avoid restaurants. 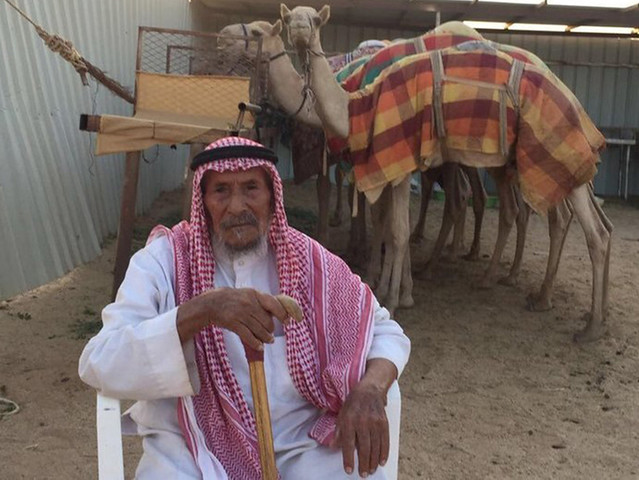 He said his daily routine is very simple and does not consist of any difficult work. He wakes up early in the morning and he spends the whole day with his camels and family members.

He said he is not the only one who had got such a long life. Her aunt also died at a very old age and she was also gifted with sharp memory till her death.

He still member and recalls his memories. He talked a bit about his life and said he was married twice and had 7 daughters and 4 sons and now 38 grandchildren. His memory is still sharp and he still recalls his past life.

He was interviewed by a Saudi news channel where he said, he doesn’t feel lonely, he may need a cane to walk more steadily, he can sit on a chair and wear eyeglasses but still has good and sharp memory and he can recall all his events and date and major developments.

Khunaifer had seen many changes during his lifetime. During the time when he was growing up, a camel was sold for 40 riyals and but now the prices had reached to its extent and camels prices had risen to millions.

He said life has changed a lot from the past, he has seen many revolutions in his life. He talked about the communication system of past days. According to him if a person moves to another village, the only source which informs about him was other travelers.