A few years back we came through the news of a Pakistani Tea seller who became a model after his pictures went viral on social media. A similar instance also happened in KSA.

Mohammad Waqas, a 24-year-old Pakistani carpenter arrived in the Kingdom Of Saudi Arabia nearly four years ago. He aimed to earn a better livelihood t support his family. For the last four years, the carpenter has been working in the Kingdom full-heartedly. 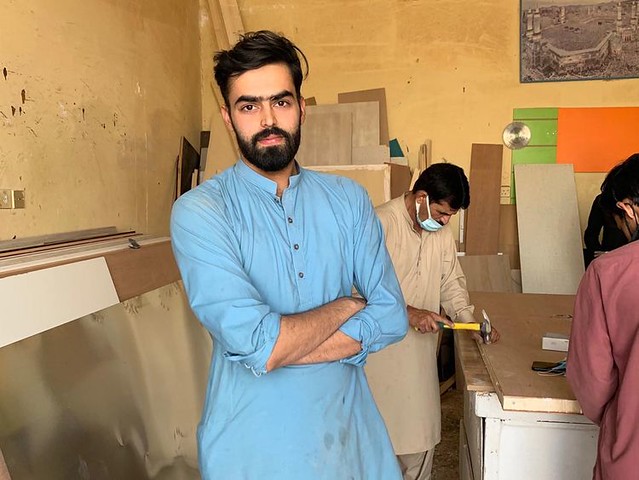 He always dreamed of becoming a model but his dreams could not be fulfilled and he left all the hopes to become a model. Hence, he carried on his carrier as a carpenter.

What made him a model?

One of his friends posted his photo on Twitter that changed his life. According to Mohammad Waqas, he saw his friend editing the Photos of a photo session. In his conversation with his friend, he told him that he always wished to work in the fashion industry but never got an opportunity in Pakistan.

His words were; “Since my childhood, I wanted to work in this field but never got a chance in Pakistan.” At this, his friend captured his picture, edited it, and sent it to the relevant person who could provide him an opportunity in the field.

The screenshot of the advertisement of his friend asking for a modeling chance for him went viral on Twitter. He asked for the agencies looking for new models to contact with him.

Mohammad Waqas received a modeling opportunity in a short time. He was offered a chance to work in Saudi Arabia- based vest making company.

What was the new model reaction?

On his success, Mohammad Waqas said that he came to Saudi Arabia some four years ago and never thought that his dream will be fulfilled in Saudi Arabia far away from his country. It was an unexpected proposal for him to work as a model in an advertising company.

Mohammad Waqas posted his modeling picture on his Twitter account. He is currently updating his social media accounts. He has succeeded in getting 19,600 followers on Twitter.