We have given district-wise details of postal codes of major cities of Saudi Arabia such as Riyadh, Jeddah, Dammam, Khobar, Jubail, and Yanbu.

Zip Codes of all cities of Saudi Arabia

If you don’t write the correct postal address, the Saudi post will deliver the shipment to the wrong station. Make sure you are registered with the National Address System of Saudi Arabia to receive any shipment at your address.

The postal code of King Fahd District where the Kingdom Center and other main attractions of Riyadh are located is 12271. We have listed down the postal codes of all 45 districts of Riyadh below.

The Zipcode of the district Al Balad where the majority of historical buildings, SAMA head office, and SAPTCO Jeddah can be found is 22233. Moreover, we have given the zip codes of 54 major districts of Jeddah below.

The center of attraction of Makkah is the Masjid al-Haram and the zip code of the area where it is located is 24231. We have given the postal codes of 47 major districts of Mecca below.

The postal code of Al Hussam district, the most important area of Dammam where the offices of Saudi Aramco, the Ministry of Foreign Affairs, and the Chamber of Commerce are found is 34223.

We have given below the postal codes of 80 major important areas and districts of Dammam.

The Zip Code of Al Jisr, the most famous district of Khobar where King Fahd Causeway toll and Civil Affairs offices are situated is 34714. We have given the list of zip codes of 50 important areas and districts of Khobar.

The postal code of Yanbu Al Sinaiyah where the Saudi Aramco refinery and LUBEREF are situated is 46477. In order to send your shipment to another district of Yanbu, follow the zip codes of the 38 areas given below. 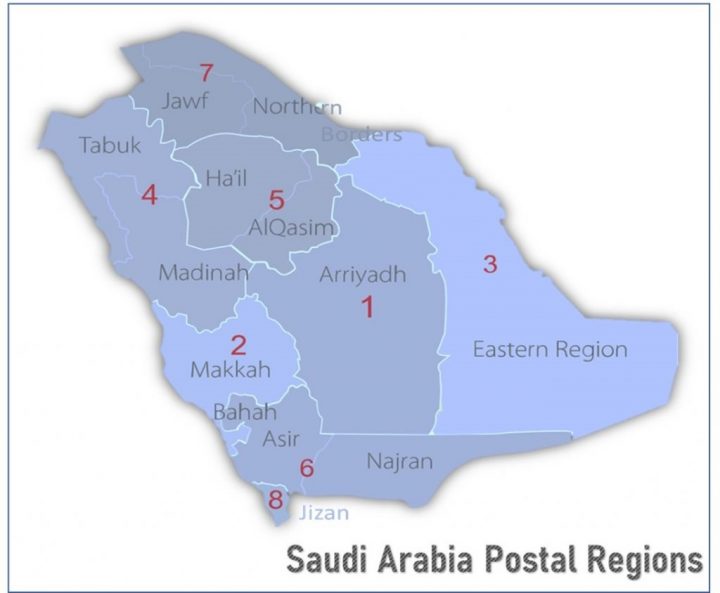 ZIP code or postal code in Saudi Arabia is a 5 numbers digit and each digit represent a particular area;