Zimbabwe Dollars series from 10 to 100 billion printed within one year period. The value of the currency decreases because of the level of the hyperinflation (raising prices).

The Reserve Bank of Zimbabwe blamed for the failure of the sanctions imposed by the United States of America, the IMF and the EU for the chaos and instability of the currency.

It is no more the official currency of Zimbabwe 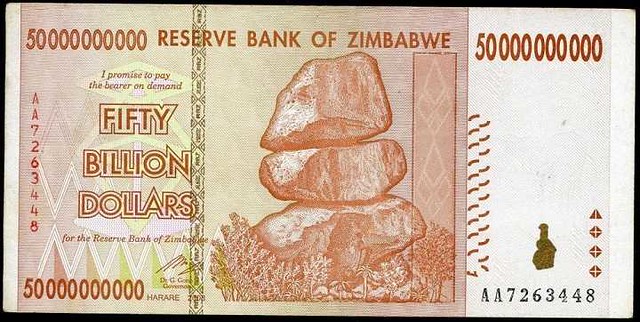 The Zimbabwean dollar has been abandoned

The 100 trillion dollar new notes were selling for 17 US dollars. The general postal service was also asking for US Dollars, $5 for a 100-billion-dollar note from its customers.

On 29 January 2014, the Zimbabwe central bank announced that the US dollar, South African rand, Botswana pula, Pound Sterling, Euro, Australian dollar, Chinese yuan (renminbi), Indian rupee and Japanese yen would all be acknowledged as legal currency within the country.

On 12 June 2015, the Reserve Bank of Zimbabwe said it will begin a process to demonetize the Zimbabwean dollar, to officially value the fiduciary currency at a rate of 0. The old unit of currency must be retired and replaced with a new currency unit. The plan is to withdraw currency from use and to have totally exchanged to the US dollar by the end of September 2015.