Home General Information Health Issues Why you should not bite the skin around your nails?

Most of us probably know somebody who cannot stop biting the skin which is located around their fingernails, that somebody may just be you. Some of the people, indulging in this activity, do so due to anxiety and do so unconsciously. Other people develop the habit during their childhood years and then never stop.

There are, however, some people who have made it into a compulsive habit, they proceed to bite the skin around the nail until it bleeds. Such behavior is most commonly associated with anxiety disorders. If you are somebody who bites the skin around their nails, or you know somebody who does, it has to stop now. Want to know why? Read on.

Why you should not bite the skin around your nails? 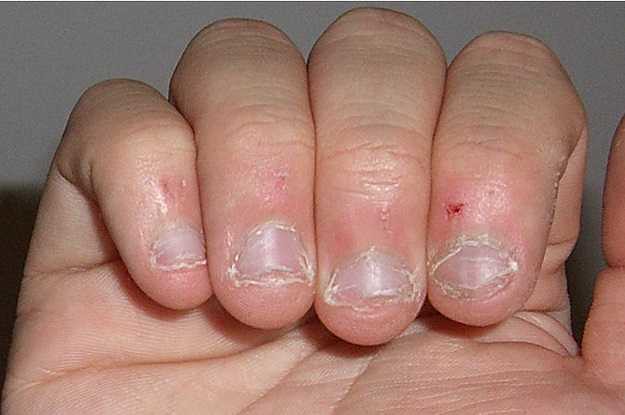 The wounds which will be created around your nails will not only allow several germs present on your hand to enter the body, allowing them to wreak havoc and make you ill, it will also increase the chances of the bacteria present in your saliva to cause an infection in your fingers, which might cause terrible damage to the fingers. You might be wondering what is the worst-case scenario, well, it is permanent irreversible nerve damage.

If you are biting the skin around your nail for a long enough period, there will surely come a time when you will not be able to reverse the signs or marks caused by the wounds created by your habit. This will result in a pair of ugly looking hands.

Hence it is best for all those who bite the skin around their nail to stop sooner much rather than later. If these people do not stop biting the skin their fingers will start looking truly horrendous, if you want to see the extent of the damage which this habit can cause, there are several examples available on the internet.

I am sure after viewing them you would immediately stop this dangerous habit. Who could have thought that the simple, seemingly inconspicuous act of biting the skin around your nail, which can be compared to other unconscious stuff we do such as shaking our feet or tapping the pen, etc. could be so dangerous, but it is.