He went there to meet the President of Egypt and made a history during his tour to Egypt by becoming the first-ever Saudi Royal member to visit St. Mark’s Coptic Orthodox Cathedral in Cairo. He also met with Egypt’s Pope Tawadros II, 118th and current Pope of Alexandria.

The meeting of these two figures of different religion aims to highlight the coexistence among people of different faiths among the region.

Saudi Arabia is a Kingdom, where Laws are built on the fundamentalist interpretation of Islam but now Mohammad bin Salman seems resolute to change the laws of Saudi Arabia and is trying to lead the Kingdom toward moderate Islam which is open to all the religions.

The first day of his visit to Egypt, the Crown Prince met with the President of Egypt, Abdel Fatah Al-Sisi and rose a discussion on the major topics including closer cooperation, Regional Conflicts, and other important deals between the two nations.

While on the second day of his trip he decided to visit the Coptic cathedral where he met with the Pop Tawardos II. This visit to Coptic Cathedral was totally unprecedented.

Prince Mohammad bin Salman and Pope Tawardos were also seen walking together through the Coptic Cathedral. The first member of the Saudi Royal family marked his trip as a historic trip.

It was reported that the two, Prince and Egypt Pope Tawadros II highlighted the importance of fighting terrorism and aim to stand united to promote tolerance.

They also discussed the brotherly relations between Saudi Arabia and Egypt and also the worth of achieving security and peace for the people of the region and world. 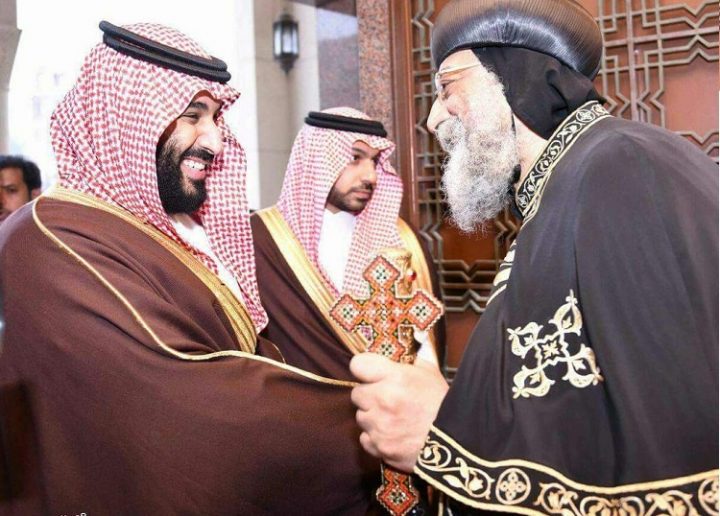 This visit of Saudi Crown Prince to Egypt came just weeks before upcoming Egypt’s presidential elections. It was also said that Prince Salman visited his closest ally, Egypt President Abdel Fatah Al Sisi to prepare him to run in an election which he is guaranteed to win.

This Young Crown Prince with his more moderate and unique ideologies is working to bring a change in the Kingdom and the result of his hardworking can be seen by the recent developments and changes taking place in the country.

However, this tour of Crown Prince to Egypt stated making rounds everywhere and his meetings with the prominent figures where he discussed many important matters were appreciated by many social media followers. They totally admired the steps taken by Prince Mohammad bin Salman.