There is a distance of around 310 kilometers between Mount Judi and Mount Ararat and Prophet Noah’s ark landed on one of them. Discussion on the topic should be conducted carefully as both the Bible and Quran are holy books. 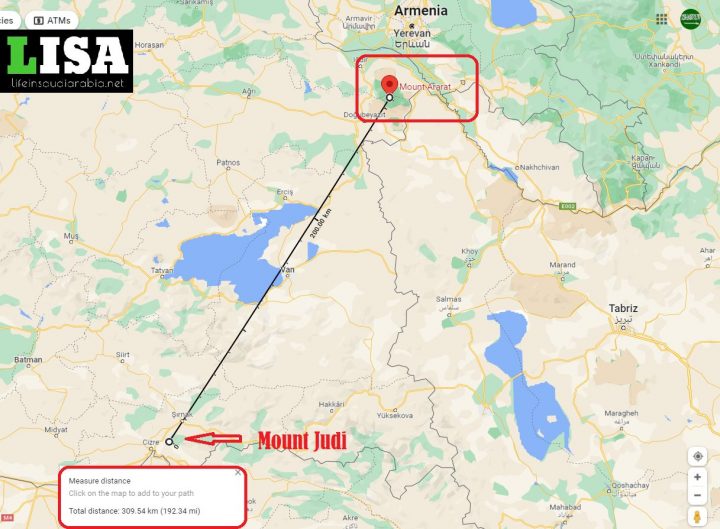 Size of the Ship

The Ship of Prophet Noah عَلَيْهِ ٱلسَّلَامُ was of the following size;

In the Bible, it is written that “on the 17th day of the 7th month the ark came to rest on the mountains of Ararat.” – Genesis 8:4

Mount Ararat is located on the eastern side of Turkey near the border of Armenia. Many Christian tourists come to visit the place from all around the world.

Located in Turkey and known as ‘Agri Dagh’, the mount of Ararat represents the Biblical version of the location of Prophet Noah عَلَيْهِ ٱلسَّلَامُ Ship.

Mount Judi is located on the southern side of Turkey near the borders of Syria and Iraq. Some people claim that the place shown in the picture below is the location where the ship of Prophet Noah عَلَيْهِ ٱلسَّلَامُ landed on the Mount Judi.

They claim that the size of this mark is around 135 meters which is exactly the size of the ark mentioned in the Holy Bible Genesis 6:15

Did anyone find Prophet Noah Ship?

There have been many claims by different researchers that the remains of the ship of Prophet Noah عَلَيْهِ ٱلسَّلَامُ have been found in either Mount Ararat or Mount Judi.

However, in 2020, the Institute for Creation Research acknowledged that, despite many expeditions, Prophet Noah’s Ark had not been found and is unlikely to be found.

It is possible that both locations Mount Judi mentioned in the Holy Quran and Mount Ararat mentioned in the Bible are the same location. Many archaeologists and researchers of both religions agree on the fact that the Ship landed in Turkey.