A man in Saudi Arabia divorced his wife just because he sent her a text message on WhatsApp and the wife saw and ignored the message rather than giving any response to it.

WhatsApp has launched the feature of blue ticks now which reveals if the recipient has read your messages. The man got suspicious about the activities of his woman, as she might be busy in communication with any other person instead of her husband.

For this reason, he set it as a solid ground to punish her by getting separated from her just in the form of divorcing her.

The husband reported that he was not contented with the routine of his wife. She used to remain busy with her relatives and friends on social media websites and online chatting that she got no time for her husband and children.

According to him, it was not just a WhatsApp message which got ignored by her wife, it is a series of events and consequently, he decided to divorce her. 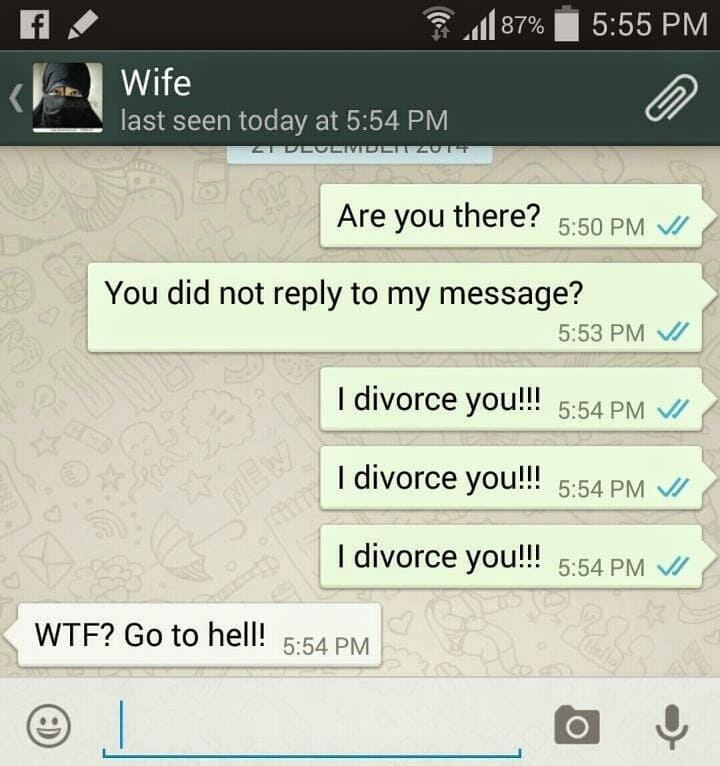 The wife, on the other hand, defended her case by saying that she could not respond to the message of her husband as she had to make many phone calls at a time.

Due to this reason, she got busy with phone calls and could not reply to her husband. His husband got angry over it and divorced her in furry.

Is the reason justifiable?

The husband based his divorce on the color of tick beneath WhatsApp message which got blue that his wife had seen the message.

If she was busy she could not have read the message, the tick must be gray as it was at the time of sending the message. Anyhow, this is not a reason to divorce your life partner.