Home Travelling from KSA Airlines Experiences What would happen if I arrive in Saudi Arabia in a short...

What is the first thing that comes to our minds when we intend to travel to some other place, location or as in this case, area, is the packing of essentials and our outfit. Not in the world does two regions share the same taste of outfits, food, temperature, people and culture as a whole.

We must have to have a know-how and knowledge of the locality before flying into a certain country. Now, as I have mentioned, culture and norms differ so does the culture from area to area, region to region.

If you are going to Dubai, you will have to follow certain guidelines, but mostly freedom as to what to wear, but when it comes to Saudi Arabia, their rules are strict and in accordance to with Islam. The Government of Saudi Arabia makes sure that these rules are followed keenly, and that no one mocks the culture, the rules and the norms of the Kingdom.

Saudi Arabia is often under the attack of open-minded people from all over the world criticizing the outfit and clothing laws within the Kingdom. Yes, one has to follow and wear modest clothes and cover themselves before and for to roam the streets of Saudi Arabia.

When you go for to acquire a visa for Saudi Arabia, you are briefed about almost everything, including your clothing, outlook, laws and prohibited items. This happens all around the world, and funny that people still feel they are above the law.

The airline crew informs you beforehand if you are not wearing modest clothes or something that goes against the prescribed guidelines by the authorities.

You are not provided with a scarf at the airports in Saudi Arabia if you arrive wearing a short skirt or small tops or men wearing shorts are not given pants, rather they are held for the interrogation, made to wear something modest from within their baggage or deported with a warning or blacklisted.

The airline carrying such passengers are fined, made to take the certain passenger back from Saudi Arabia without even getting a chance to as much as visiting the airport completely.

This happens because a person can never manage to travel to Saudi Arabia without a valid Visa and the airline has to check your visa before getting on the plane. The application form for the Saudi visa clearly explains the requirement to enter the Kingdom.

The Saudi airline attendants warn its passengers to wear a modest dress according to Islam. More amazing to hear is this is not just applied to women but also for men. Men are also warned to wear a dress that covers their body from their belly button till their knees i.e. Satr. 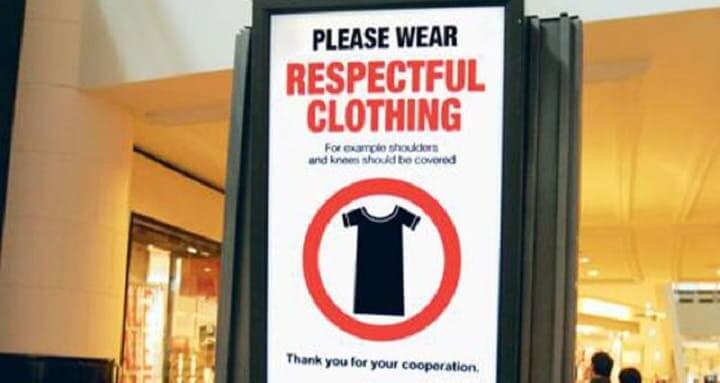 They are prohibited to enter the Kingdom in shorts above their knees which might be okay in some other countries but not in Saudi Arabia. Women wear miniskirts, shorts and sleeveless tops in the plane while traveling to the Kingdom but they wear on a moderate abaya over their dressing before leaving the plane.

Besides this, the Saudi Government has the department, the Committee for the Promotion of Virtues and the prevention of Vice (CPVPV) that employs a brute squad called Mutaween and their members roam in every city to enforce Sharia Law.

So the people who are tending to travel to Kingdom should respect the Kingdom’s culture, norms, and values and avoid to disrespect them.