Home Social Issues Islamic Stories What will happen if you shout “Allah-o-Akbar” at a public place?

Allah-o-Akbar is one of the simplest Arabic phrases which means “Allah is the greatest”. This is a phrase that is often used by the Muslims to praise Allah Almighty. It is also called in Adhan (call for prayers). However, there are many stigmas attached to it and in this article, we will be discussing those stigmas.

If a Muslim or anyone calls out Allah-O-Akbar loudly in public, especially in western countries, havoc would be created. People will panic, police will arrive, an investigation would be held and you would face more than what we call “trouble”.

However, if a non-Muslim, such as Hindu praising his God in public won’t be noticed either would be a Christian. Yet, if a Muslim is calling out “Allah-o-Akbar” loudly in public, especially if he is dressed up in a traditional manner, he would be considered as a terrorist. 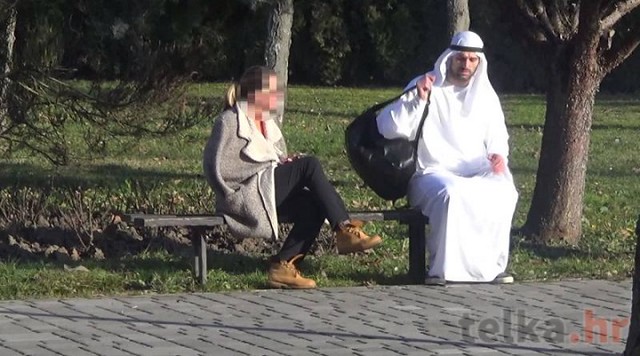 In Western countries, the situation is not better either. In a Western country, few Chinese and their Asian Muslim friend played a similar prank in the park. They were all detained over it. The police reached there and the case filed was “horrifying the public”.

None the less, even if you shout out Allah-o-Akbar as a joke in public in the West, you could face serious trouble, even death. It is said that the police gets so much frightened that they can shot you at sight. It is said that once a policeman in France became so frightened over an unknown incident that he opened fire over the crowd. It is believed that someone had shouted Allah-o-Akbar there.

In the US, since the 9/11 incident, such pranks can cost you your life as well. The police and the agents can pierce you to death.

Unfortunately, calling Allah-o-Akbar out loud in public is considered as a threat. It is predicted that the person calling out so would either explode himself or cause destruction.  May Allah be with Muslims! Amen.

A man shares his story that he was in a University bus, in Pakistan, when the bus stopped and the conductor opened up the door, he played a prank of calling out Allah-o-Akbar.

The conductor went into a shock while the people on the bus started to scream. The boy was taken to the Vice Chancellor office who told him never to play such “pathetic jokes”. A Disciplinary Committee was set up over him which deducted his marks over this act.

If you play such a prank in a country like India, which is a secular state, you would be regarded as an ISIS agent. You could be labeled as an “intolerant” person trying to freak the hell out of the people.