Home Islam Islamic values What type of Food Mann-O-Salwa was? The food of Jannah for Bani...

O Bani Israel, We delivered you from your enemy, and We made an appointment with you at the right side of the mount, and We sent down to you Mann-O-Salwa. Quran 20:80 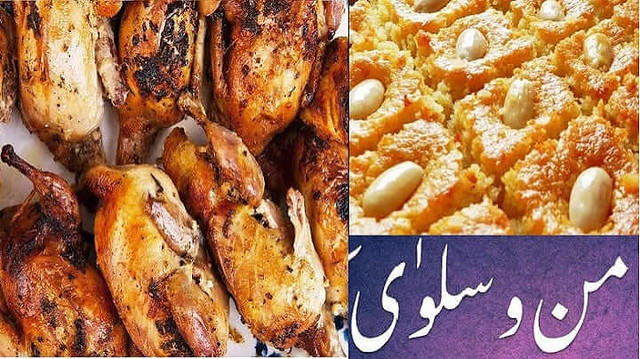 Mann was a kind of sweet, it was like the dew drops that appeared on rocks, trees, and plants, later on, it used to turn into sweet honey like substance which they used to pick up and savor themselves with.  Mann used to descend on them as snow descends and it used to be sweeter than honey and whiter than snow.

Salwa was a type of bird, basically a Quail. The people use to capture it upon which it would turn into roasted meat. It was a blessing, like none other and showered upon none other but this nation, on the request and prayers of The Prophet Moses.

Only Allah knows the best what the thing was Mann-O-Salwa. We cannot even imagine what is meant by sweetness more than honey and can anything be whiter than milk. It’s all beyond our imaginations.  Allah blessed them without demanding anything or any hard working from His slaves.

Allah knows the best: Some said Mann was honey itself. It is only Allah who knows what it was, who sent it down. There are various narrations and sayings on what Mann-O-Salwa was, but of course, with the time the words got changed, but it is understood that nevertheless, it was a pure blessing and a bounty upon Bani Israel which no one can still imagine.

They started storing the meal: Allah ordered them to eat what they get fresh but they started to store this meal. Greed is human nature, from day one till now, till we will dwell, his greed cannot be fulfilled, always wanting everything to be perfect and he often forgets to be thankful to his Lord for His blessings.

Allah always knows what is best for any person and he offered him what is good for him. This gift was taken away from Bani Israel because they started demanding something more tasteful. According to the Holy Quran, these people started saying that they are fedup from eating one type of food daily, they need some more tastes and turned unthankful to Allah S.W.T.

And [recall] when you said, “O Moses, we can never endure one [kind of] food. So call upon your Lord to bring forth for us from the earth its green herbs and its cucumbers and its garlic and its lentils and its onions.” [Moses] said, “Would you exchange what is better for what is less? Quran 2:61