Home Latest News Jawazat Related News What is the reality behind 10% tax on salary rules?

I think half of you have received this PDF file in your email, WhatsApp or Facebook accounts which claim that two new rules have been approved by the Ministry of Labor and due to be implemented within few months.

I have received several queries on my WhatsApp number asking me about the authenticity of this rule. As I cannot answer all of them personally, I have decided to write the details here. Let’s talk about this viral PDF file in detail.

There are two rules in it and I shall be giving my point of view upon them.

RULE ONE: “The Ministry of Labor in Saudi Arabia’s has issued a decision that shall be implemented within the next few months to impose, on the expatriates who earn more than (3000) Saudi Riyals, a tax of 10% of the total basic salary.

Such tax shall be collected by the bank to which such salaries are transferred, from the total sum of salaries of private companies and establishments provided that such deduction shall be made from the salaries of expatriates.

Financial Authorities, represented by the Ministry of Finance, the Saudi Arabian Monetary Authority (SAMA) and other relevant authorities, has affirmed to carry out this project, automatically, within the soon coming period.” 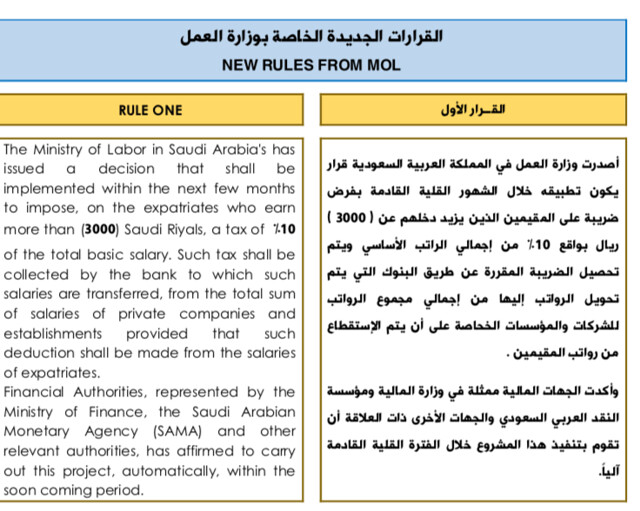 Answer by Steve on Rule One: In the first rule, they are talking about a decision which has already been taken by the Ministry of Labor to impose 10% tax upon expatriates with an income of SR 3,000 or more.

Only the Ministry of Finance can take this decision and they have not published anything related to this yet.

Secondly, it has been stated that the tax shall be collected by the banks. I have worked in many countries and have never seen banks collecting income tax from the transferred salaries. It is always the company’s responsibility to deduct income tax from the tax and later on deposit it to the DZIT.

RULE TWO: “The Ministry of Labor in Saudi Arabia, has launched an extensive campaign to reduce the number of expatriates working in the private sector by imposing fees on their jobs, and to encourage private sector to employ Saudis, and to spend the revenue generated out of such fees favor the Human Resources Fund, which was established to contribute to the nationalization (Saudization) of jobs in the Kingdom.

The Ministry reaffirmed that it will work to cause stopping recruitment and renewal of work permits for about 60 professions, and obliged companies and establishments to replace those occupying such jobs with Saudis over the next few months, and to limit sales on the sale profession to the local citizens and stop the recruitment for 23 commercial activities.” 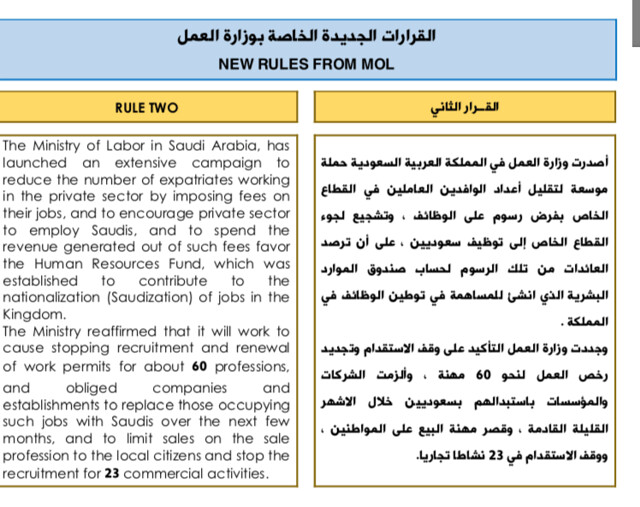 Answer by Steve on Rule Two: There is no doubt that the Ministry of Labor has been striving to improve Saudization level in the Kingdom of Saudi Arabia.

However, till now there has been no such announcement made by the Ministry of Labor stating that 60 professions have been banned for expatriates working in Saudi Arabia.

The latest updated list of professions that have been reserved only for Saudis is given in this link. Recommended: List of Professions reserved for Saudis

I hope I have clarified why you should not believe in the information provided in this PDF file. If anyone who forwards these PDF files to you in the future, you can reply to him with this article.