The tragic Crane Incident of 2015 is still fresh in our minds. The incident of falling of the crane that took lives of hundred pilgrims and injured 394 pilgrims was indeed one of the most tragic incidents in the history of Makkah.

King Salman, who is the custodian of the Two Holy Mosque, also paid a visit to the place where the tragic incident took place.  He viewed the area and declared that compensation shall be made for those who died and also for those who got injured. King Salman declared SR 1 million for each martyred and SR 500,000 for each injured.

His decision of distributing money was welcomed as it was one of the kind gestures towards those who had been made a victim of the tragic incident. Of course, no one could undo what had happened, but compensation as blood money was something that was welcomed by national and international media. 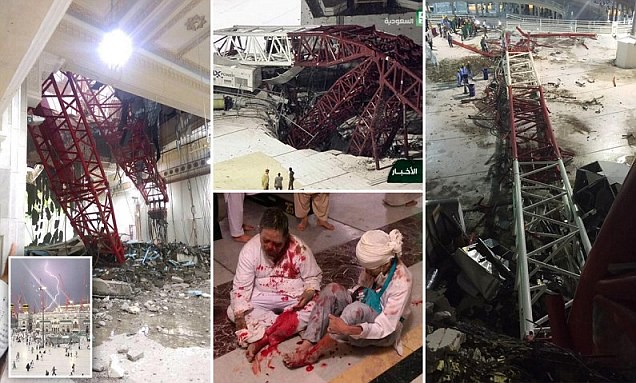 The Saudi Bin Laden company, since then was not allowed to resume the project. Moreover, to ensure that the crane didn’t fell off because of mistake or carelessness, 13 of the company’s employees, who were in charge of the crane, were convicted.

However, the court has now declared all the 13 employees as innocent. The ruling by the Summary court declares that the incident happened because of natural disaster and not because of any human fault. The crane crash was not the fault of the employees.

All 13 Employees have been declared innocent

The judge assured that the decision has been taken after carefully examining all the reports. He said that the court has reviewed all necessary reports such as technical, geophysical, mechanical and engineering reports. None of the above-mentioned reports could prove that the incident was caused by a human fault.

Rather the Presidency of Meteorology and Environment assures that the crane collapsed because of thunderstorms and heavy rains. In view of all such claims, the court has therefore declared that the victims of the tragic incident are not be given any blood money i.e. the Diyyah.

If it had been caused as a result of human misconduct, victims shall have been received with blood money. A natural disaster took place and thereby victims are not to be awarded blood money. Also, the damage caused to the mosque will not be compensated.

The crane was held carefully in a correct position, storms and heavy rain caused it to fall and took lives of 108 people and injured about another 238. Even though King Salman had declared compensation for these victims, that declaration had nothing to do with the court’s blood money declaration.

The ruling of the court is a great example of Saudi Justice System. It shows that no one is above law. Even the decision of the King of Saudi Arabia to pay for the blood money can be withheld by the Saudi Courts. This is the true picture and Islamic Justice System.