During the Hajj 2018, a rare and unexpected storm hit Makkah, Saudi Arabia. The massive storm was observed on August 19, 2018. On Sunday, in the noon the storms hit the Holy city. Heavy rains were also observed in Madina.

The storm was observed during the Hajj days. Just a few hours before the Day of Arafat when pilgrims were getting ready for this ritual known as the Wuquf, a strong storm came by and shook around almost everything. The tents came off and caused a lot of problems to the pilgrims.

The authorities had to cut off the electric supply of the tents for the safety of more than 30,000 pilgrims. The sources reveal that the supply was restored by 11 pm.

Hidden Door of the Holy Kaaba

However, the most interesting part of the storm is that it revealed the history of the Holy Kaaba as well. There is one fact that is indisputable in history and that is; the Holy Kaaba had two doors for a long period of time.

The storm allowed the cover of the Holy Kaaba or the Kiswah to flow as well. It could not hold by the storm and started to flow with the wind. As it did, we could see the Holy Kaaba that is usually covered up by the black cloth. 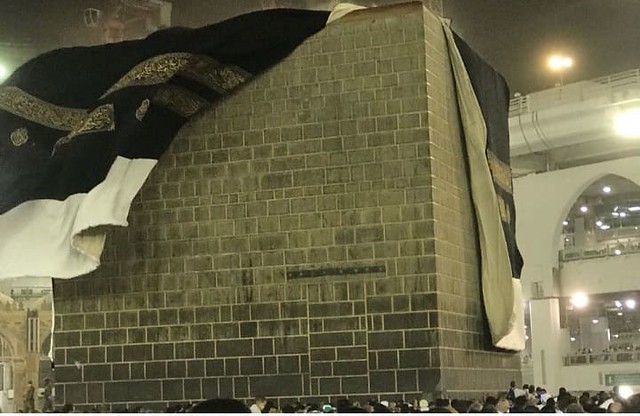 The pictures and videos are also out on the internet. One can clearly see a visible dark horizontal line on one side. This line is the indication of the door that was built by Abdullah bin Zubair R.A.

The door was made by Hazrat Abdullah bin Zubair

Accordingly, in 64 Hijri, when Abdullah bin Zubair was appointed as the Khalifah he built this door on the guidelines of Hazrat Aisha R.A.

She narrated that the Holy Prophet PBUH expressed his desire of building a door at the Holy Kaaba so that the visitors would enter it form one door and leave from the other. Yet due to the shortage of funds he PBUH, did not. Also he PBUH was fearful of the newly converted Muslim’s iman.

Yet, in 75 Hijri` when the Banu Umiyah again conquered the city of Makkah under the leadership of Hajjaj bin Yousuf, the Holy Kaaba was reconstructed on previous architecture which still prevails.

Components from the older doors of the holy Kaaba have been kept in some museums as part of Islamic treasure. We have covered some details of the Oldest Door of the Holy Kaaba in another article.