Muhammad Ali who hailed from India with his wife and two children and moved to Saudi Arabia in 2003. His two children undertook to school here and joined the 4th standard. While their stay in Saudi Arabia, they were blessed with 6 more children.

However, during the past year, they lost both their parents and the 8 children went through the worst time of their lives. The youngest among them is 3 years old and the eldest is only 17. There was a time when they had to starve for days.

Their parents died in a quick succession

The mother passed away last year. The father, who was already under financial burden could not well bear the loss of his wife and fell extremely ill. He wanted to go back to his country and live there. He wanted to take his children back home and continue their lives there. It was as if things were not going as per plan and he ought that moving to Saudi Arabia wasn’t a wise decision. 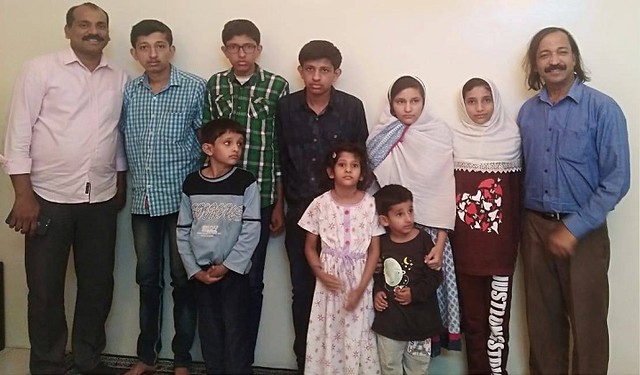 Their time changed in 180 degree

He was declared huroob, his iqama was expired, the place he was working had been closed down and there was a vehicle registered on his name: all these caused his deportation process a complicated one.

The bed-ridden father could now not even afford his medicines. His two elder sons started to undertake odd jobs to meet the needs of the younger siblings. The poor kids, who were to go to school and enjoy life were often doing hideous tasks at workshops. Finally, the father passed away.

The intervention of the Indian Embassy

Things got better when they met the five good Samaritans – Shahnawaz, Qayyum, Saleem, Misbah, and Zafar. They helped the children and gave them shelter. Also, they approached the Indian embassy through the renowned social worker Shihab Kottukad.

Kottukad approached the Indian embassy, helped in preparing documents: waived off his status of absconder, helped pay the outstanding fee and process the exit visa procedure. 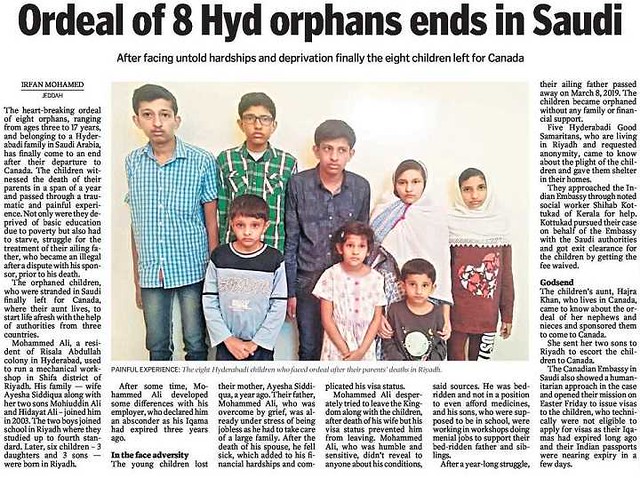 They have moved to Canada

They finally left for Canada where their aunt lives to embark on a new life with the help of authorities from three countries.

Finally, their aunt named Hajra Khan who is living in Canada came to know about the condition her orphan nephews and nieces. She extended help to them by sending her two sons to Saudi to escort children to Canada. She wanted to take care of children by herself and thereby called them to Canada.

The Canadian diplomats in Riyadh helped in issuing the visas to the children under their humanitarian concerns by opening the mission during the Easter break.