Home Uncategorized The Dollar Rises Putting Pressure on Gold in 2021

The dollar, euro, and gold have experienced mixed results so far in 2021. The correlation between the dollar's performance and gold prices has been negatively correlated, which is the regular movement traders expect. U.S. long-term yields have moved higher, despite softer than expected data, as riskier assets have increased as it appears the U.S. is headed for another sizeable fiscal stimulus package. The dollar has attempted to move higher as the vaccine rollout in the U.S. starts to gain traction. If the economic outlook starts to improve, U.S. yields will trend higher, putting upward pressure on the dollar and downward pressure on gold prices. 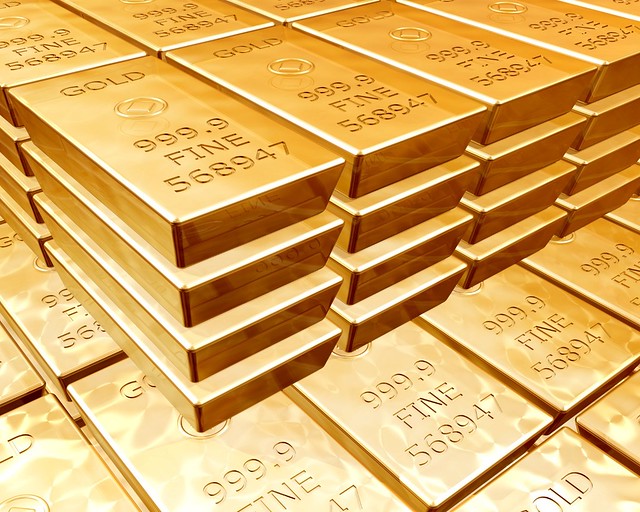 Interest Rates, the Dollar and Gold

Interest rates are a critical component of currency and gold trading. Interest rates make up the forward curve that is used to determine the future delivery price of a currency pair. Currency traders use the interest rate differential between the counter and the base currency to create a spread. This spread, known as the forward points, is then added or subtracted to the currency pair to determine the forward rate. This same concept is used in the gold market. Gold forward points (which are rates versus the U.S. dollar) are added to the spot rate to determine the gold forward rate. Since gold is priced in U.S. dollars, generally, when the dollar increases in value, gold prices decline to offset the rise in the total value of gold in dollars. The reverse is usually true when the dollar falls.

Gold prices have been under pressure in 2021, as riskier assets gain traction and the dollar rallies. Gold has historically been viewed as a safe-haven asset, but during 2020, this status was mixed. There were several periods when gold rallied in tandem with stocks and periods when the yellow metal benefited from safe-haven flows. In 2021, gold prices have eased, falling approximately 2.5%. The dynamic has occurred as riskier assets have gained traction. The large-cap S&P 500 index has rallied around 5% in 2021, helping to push U.S. yields higher. The U.S. 10-year benchmark yield has increased from 92-basis points to 115-basis points in 2021. This backup in yields has helped increase the yield differential against most major currencies, helping to buoy the value of the USD.

The EUR/USD declined from 1.22 and hit a low of 1.1960 in February before rebounding back above the 1.20 handle. The European Central Bank has focused investment and on additional monetary policy strategies that could erode the Euro exchange rate.

The EUR/USD is attempting to find a bottom in early February but appears to be running into resistance near the 50-day moving average near 1.2145. The trend is downward sloping and confirmed by the 10-day moving average crossing below the 50-day moving average. Short-term momentum on the EUR/USD has turned positive as the fast stochastic generated a crossover buy signal in oversold territory. The fast stochastic bounced to 47 from 14, which reflects accelerating positive momentum. Medium-term negative momentum is decelerating. The MACD (moving average convergence divergence) histogram is printing in negative territory with an upward sloping trajectory, which points to consolidating and a positive crossover buy signal. The RSI (relative strength index) also rebounded sharply, which reflects accelerating positive momentum.

Gold prices have moved in tandem with the EUR/USD. The correlation between the currency pair and gold prices has been high in 2021. Prices also tested support rebounding near the February lows at $1,785.  Short-term momentum on gold prices has turned positive as the fast stochastic generated a crossover buy signal. The fast stochastic never made it to oversold territory and rebounded from the middle of the neutral range. Medium-term momentum has turned positive as the MACD (moving average convergence divergence) index generated a crossover buy signal. This scenario occurs as the MACD line (the 12-day moving average minus the 26-day moving average) crosses above the MACD signal line (the 9-day moving average of the MACD line. The MACD histogram is printing in positive territory with an upward sloping trajectory, which points to higher prices.

The EUR/USD rebounded in early February, but the trend in 2021 has been downward sloping. Most of the losses were due to rising U.S. bond yields that buoyed the U.S. dollar. Higher treasury yields were a function of strong riskier assets such as stocks. The downward trend in the EUR/USD weighed on gold prices, which are also down in 2021 but rebounded slightly at the beginning of February. If a vaccine successfully generates herd immunity in the U.S., there is likely to be a further rally in riskier assets, putting upward pressure on U.S. yields and the dollar and downward pressure on gold prices.

How to Go from ETH to TRX and Where to Do It Instantly?

GetInsta – Your Final Stop for Free Instagram Followers and Likes

How can Saudis study well in the USA?