Najmat Taiba: Innovative and creative people have fascinated the world. People come up with ideas that become the center of attraction for others. In 2000, Najmat Taiba took the world by its storm and still is in the buzz.

The Najmat Taiba or the star of Taiba holds the Guinness book of world records certificate and is also endorsed by World Gold Council.

The masterpiece which was created in 2000 weighs about 64Kg in the composition of 58.686kg Gold and is beautifully embedded with 5.17kg of Swarovski stones. Recommended: A Saudi Company (Taiba Gold) produces 33 KG Gold Set – World’s Heaviest 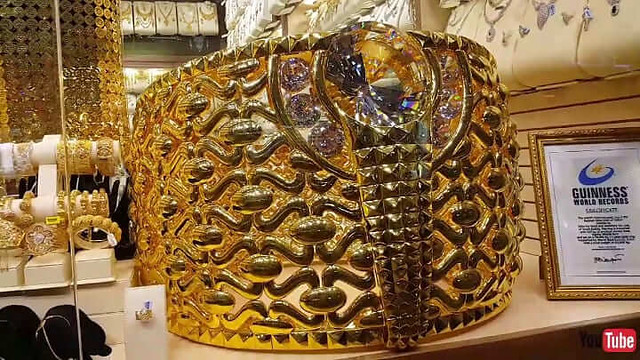 Features of Najmat Taiba: The finely created Najmat Taiba is not only a symbol of beauty but also hard work. It took 45 days of 55 professional gold makers to create this beauty. The 21-carat gold ring is worth SR 12 million. As per the reports, the ring has a perimeter of 2,200mm.

The outer perimeter is 700 mm while inside diameter is 490 mm. A 500 mm wide width at its back while 250mm width at its bottom. The spectators are amazed by its fine design and can’t get enough of it.

Sharjah Expo Center: But that is not the only place where viewers got a chance to see the expensive and breathtaking ornament. It was displayed in Deira Gold Souq and Sharjah Expo Center at the event of 39th Mid-East Watch and Jewellery Show that took on October 6, 2015.

The Najmat Taiba tends to amaze its viewers. One is not only overwhelmed by its beauty but is keen to know that how was it created? It surely astonishes one. It is an eye-catcher and one cannot take eyes off it easily.  Gold and jewels do have an attraction. 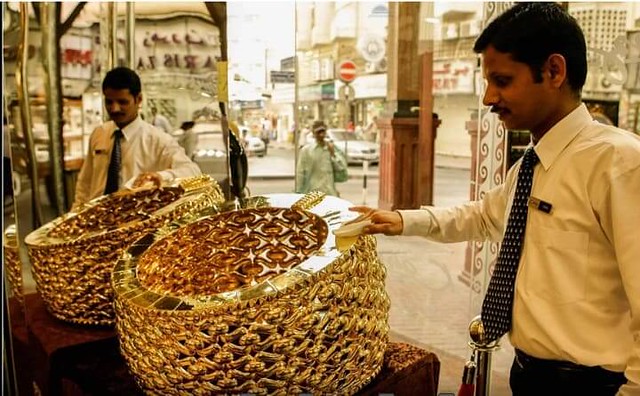 The cost of making the World’s Largest Gold Ring: People love them, but this beauty is worth watching. The astonishing creation is rich in beauty, perfection, and costs.

When it was created in 2000, the owner had to bear a cost of $547,000 for the back of the ring only when gold was traded for $250 an ounce. But this is not the only beautiful asset of Saudi Arabia.

World’s Largest Gold Set: We also own the title of creating the world’s largest gold set. Yes, the same company, Taiba, has created a gold set weighing 34 kilograms. The set contains a necklace, a bangle, a ring and a pair of earrings.

This 24-karat gold set took a year to be carved with the most delicate design. 100 gold designers are responsible for the creation of this magnificent piece of art. The task was undertaken to honor the kingdom of Saudi Arabia in a unique style.