Reasons for Hike in Traffic Fines: We have been enlightening our readers about the latest developments in the rules and regulations as well as a number of traffic fines imposed on different people. We have seen a surge in imposing traffic fines on people from the last few months. There are three reasons behind the hike in fines.

I was going on Dubba Tabuk Road. This road is a single road with two-way traffic. When I passed around 20Km, I saw 2 Toyota cars parked on the other side of the lane along with a traffic police car. I took the impression that it is a traffic accident and a police car is processing the documentation for the accident.

I kept on driving at around 30Km/hour as most of us always do. When I reached near the cars, I saw 2 traffic police officers standing there. I didn’t see any sign to stop my vehicle, there was no check post or police vehicle stopping the route.

Immediately, they signaled me to stop the vehicle. I tried to stop immediately, but since my car speed was 30+, it took me some time to stop and the car traveled 2 meters ahead of them. They asked me to park the car on the roadside and come out of the vehicle and I did the same.

They were mad at me that why I didn’t stop the car when they asked me to do stop it. If I was sleeping or what. I told them I stopped it as soon as you signaled me to stop.

Anyway, they didn’t listen to me and fined me for not stopping the vehicle upon request. The amount of fine was not stated there. I carried on my journey after that. A couple of days after that, I receive a message from traffic police for the same violation and with an amount of SR 3,000.

Now I am planning to challenge it but as people say, there is no chance of winning the case against them. I will have to pay this amount ultimately. 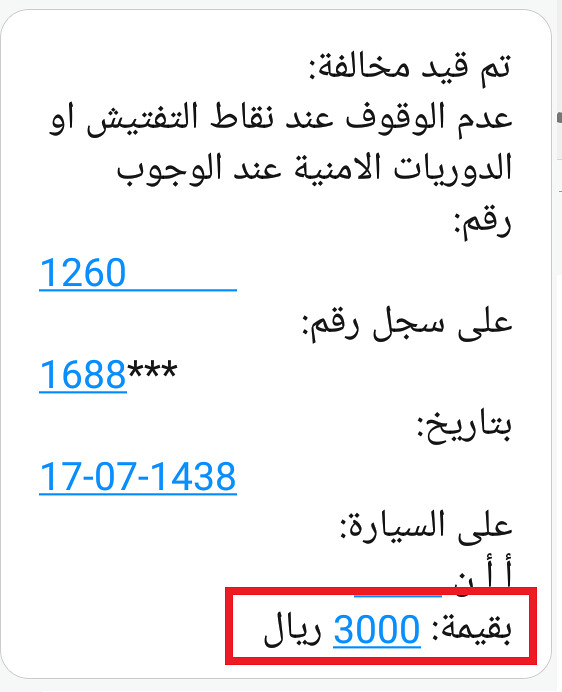 It is my humble request to everyone to comply with the traffic rules. Don’t repeat the mistake I have made. Whenever you see any traffic police car on the highway, slow down your speed so that you can act on their signal. If you stop your vehicle a little far away, you will have to pay SR 3,000 and it is too much money.