A daily newspaper in the Kingdom of Saudi-Arabia reported that the account of an employee who is working in the public sector has been frozen by the Saudi Arabian Monetary Agency (SAMA).

The account holder is just a public-sector employee who in his 30's. He got shocked after receiving a text message that his account has been sealed. The reason for the freezing account was that his account received transaction of amount SR 1.2 billion which also surprised him.

The Saudi Arabian Monetary Agency froze his account instantly on the suspect of money laundering. The concerned account holder went to the bank to investigate and receive details from the bank. 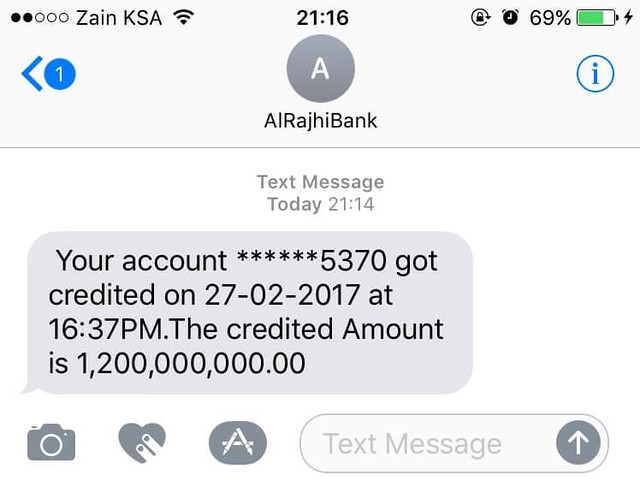 The bank informed the account holder that the reason for freezing his account is possible doubts of money laundering case. The bank also informed him that he should contact the Ministry of Interior Monetary Investigation Department.

Asim Al-Mullah who is by profession Lawyer and works as a legal consultant, states that deposit or transferring money from outside of the Kingdom and without highlighting the source of the money transaction is considered money laundering.

This kind of monetary transaction received by the bank is usually a part of any illegal source of business such as trading of weapons or drug smuggling. As this is an organized group of gangs who are working systematically, which transfers illegal money logically and then operates account of the concerned client where they transferred.

The gang makes sure that the concerned clients must be able to withdraw the transferred money without any inquiry by the authority.

No Customized Procedure to deal with Money Laundering Cases:

Although, the Kingdom holds an international agreement that permits to deal with drug smuggling cases they do not have any customized procedure by which they can deal cases of money laundering which is outside the borders of the Kingdom.

It is a big challenge for the Kingdom of Saudi-Arabia to tackle ordeal such as international money laundering cases.

How to check your credit report with SIMAH?

How to change mobile number in NCB bank online?