The Red Sea Mall is the largest and most beautiful mall of Jeddah located on King Abdul Aziz Road with various local and international brands along with facilities like eateries, parking space, sports, and social events. Unfortunately, we could not provide Red Sea Mall Jeddah list of stores as they keep on changing every now and then.

This mall is a property used for various purposes like a mall, high-end hotel, and offices. It is a challenge to run such property as it needs expertise in several areas. Back in 2011, the Red Sea Mall received numerous awards like Excellence in Retailing, Gold Award, Excellence in Tourism etc. 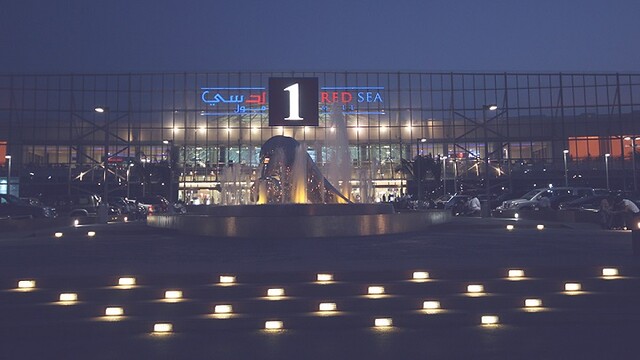 2-75% of the mall opened in 2008 as a few retailers were doubtful to open their stores in the mall or not considering how the world crisis affected Saudi. Since then, the mall’s occupancy rate is getting higher each year and the rate is around 98% now.

3-Back in 2004, several shareholders took part in a long-term investment for this mall which meant they would receive their average return in 7-10 years. They came up with this mega project and the mall started to operate in 2008. It has a 110,000 GLA, high GBA, and a high-end hotel and towers.

4-Food Court of the Red Sea Mall is the biggest hit among all the malls in Jeddah. It becomes very difficult to find a single spare seat, especially on weekends.

5-The cost exclusive of the land is SR800 million by having SEDCO, the largest shareholder and several others as well. The total sales of the project are between SR1.5-1.8 billion and we expect to grow.

6-Red sea mall is the only mall with various events going on and 70 events will be held this year only.

7-SR 680 is spent per visit by most families in Red Sea Mall and it exceeds SR900 in peak seasons like Eid or Ramadan.

8-60 stores in this mall are owned by women solely and the number is expected to increase.

9-The mall has a total of 450 stores along with 6 anchors. There are almost 2,500 employees in the mall out of which half are Saudis themselves. 300 females work in the mall and we are working to increase this number. We are working to upload the Red Sea Mall Jeddah list of stores.

10-The Red Sea Mall Jeddah has been constructing a state of the art cinema which would prove to be the first cinema in Saudi Arabia.

Some Questions from the owner of Red Sea Mall

Q1: Having the mall away from the city, does it affect the mall in any way?

That is not true as most large malls are never built in the city, be it anywhere in the world. It is situated in the North of Jeddah and that’s an advantage as the population here is huge and we know the city itself will start to expand till here.

Q2. Any future of opening such malls in another city?

Developing such large-scale projects is not easy as it includes a lot of hard work such as planning and gaining finance. However, we are thinking of doing so because our stakeholders have a lot of vacant lands and we have a list of 75000 retailers eager to be a part of this mall, so we might consider taking the plan forward.

Q3. What things do you do for CSR?

We are doing several things for CSR like giving utmost importance to the issue of men and women here, giving charity and providing women with an opportunity to work. We sponsor various events for charity. We have also prohibited stages in the mall so that families don’t feel uncomfortable.

There are various events, seminars, and meetings that take place to make people aware of the ethics and etiquettes of shopping. The Middle East council has 12 offices all over the world to promote shopping ethics according to the standards of international malls.

10 reasons to live in the King Abdullah Economic City (KAEC)