We should respect the dignity and emotions of everyone while talking to them face to face or on any other chat platform. Especially if you talk about WhatsApp and other social media platforms, all your chat is saved and can be used against you.

A very peculiar incident was reported from Jeddah this week. A Saudi woman was jailed for sending abusive messages to her ex-husband.

A man filed a lawsuit against his ex-wife to whom he divorced five years ago. The woman was accused of sending abusive messages to her ex-husband via Whatsapp. The man blamed that his ex-wife used insulting and racist words against him.

In the beginning, the court referred the two to a Legal Reconciliation Committee so that the two could patch up things between them. However, it seemed as though none was ready for a settlement. 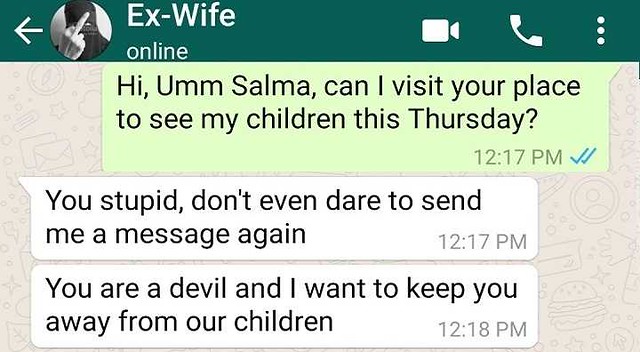 She claimed that her abusive messages were in response to the alleged insult from her ex-husband and also his misbehavior toward her family.

Besides announcing the sentence to prison, her for three days, the court also warned the woman to never extend such behavior towards anyone.

In a similar case, a Saudi man was given a sentence of 40 lashes on his back for abusing his wife as it is completely unacceptable in Saudi society as well as the religion of Islam. Recommended: Saudi gets 40 lashes for abusing his ex-wife

UAE has very strict rules against such type of misconduct where a man or woman can be jailed for 5 years and fined up to AED 500,000.