The School security and safety administration at the Education Department in Makkah has extended appreciation for its loyal and most punctual worker.

The administration saw that one of their cleaners had full attendance, was punctual and on time, devoted to work and there had been no complaints registered against him.

To their surprise, the cleaner used to walk 3 Km every day from his home to school, yet he was never absent, never came to the school late and had no complaints.

According to Raed Bin Samran Al-Maqati, who is the Director of the security and Safety department, Mohammad hails from Bangladesh and is the most punctual worker. 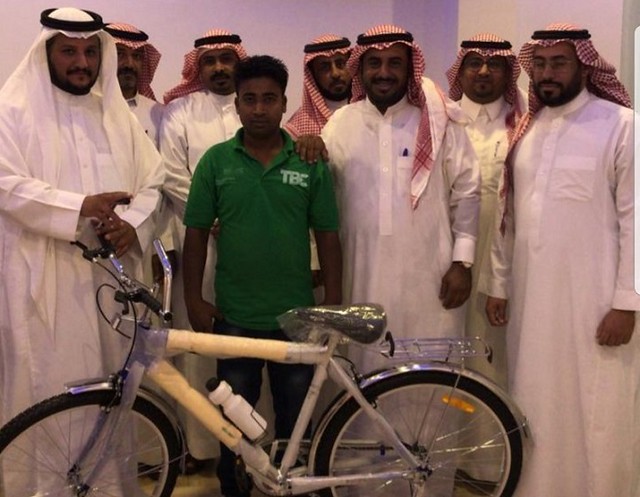 He is the most punctual employee of the school

He also noted that he is the first-ever worker to have the most attendance. He motivates other workers to be punctual and dedicated. Although, he comes from a long way and on foot, he is never late nor is absent!

His sincereness and his attitude towards the work has granted him respect all over. He is now gifted with a bicycle from the security and safety department. This is just a small act of appreciation. Now, he shall be more comfortable as he travels to and from school.

The small celebration in which the Bangladeshi worker was gifted a bicycle, made the worker’s eyes filled with tears. He was overwhelmed by the act and was eager to inform his family back in Bangladesh.