Nursing requires a soft-hearted and a determined person who could work out of their way to help someone in distress. The nursing profession is one of the oldest and considered holiest of all professions.

A man fell down in a shopping mall in Abha: One such example of humanity and hope was seen in the mall in the city of Abha, in Saudi Arabia where a man collapsed suddenly.

To the luck of the man, there was this soft-hearted and kind nursing student present in the mall who was not an on-duty nurse nor she was working but was enjoying her time while shopping like all others in the shopping mall.

She provided the first aid: She rushed to the aid of the man and saved him of a serious medical problem. The nurse helped the man and performed the basic first aid services. She instructed the men that were accompanying the collapsed man to help him gain conscious.

The nurse was appreciated by the onlookers and passersby. They appreciated the efforts of the nurse and her concern. Her timely instructions helped the man to regain consciousness and sit up before medics and an ambulance arrived.

The Kingdom’s Red Crescent officials in Assir governorate have appreciated the efforts of the nurse and have handed over her the certificate of appreciation. 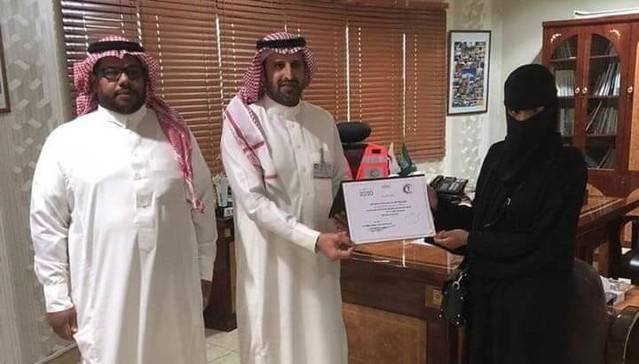 Viral Video: Someone captured all this incident and this video of the nursing student helping the man went viral on social media. This video got a mixed response from the people.

Some hailed the actions of the nurse and her timing help whereas some criticized her for her not helping much and labeling her for getting in the limelight because she is a woman.

As we know that under the leadership of Crown Prince Mohammed bin Salman, Saudi Arabia is changing. Now women are appreciated in every field of life especially medical field.