A medical team at King Fahad hospital in Jeddah succeeded in removing a large tumor from a patient’s abdomen. The major operation was led by Dr. Saad Al Awad who is a well-known consultant endocrinologist and oncologist.

According to the doctor, the patient is a resident of Jeddah of age 50. She was suffering from bleeding, pain in her abdomen, and other problems. The tumor inserted internal pressure on the internal organs of the abdomen and pelvis of the patient. 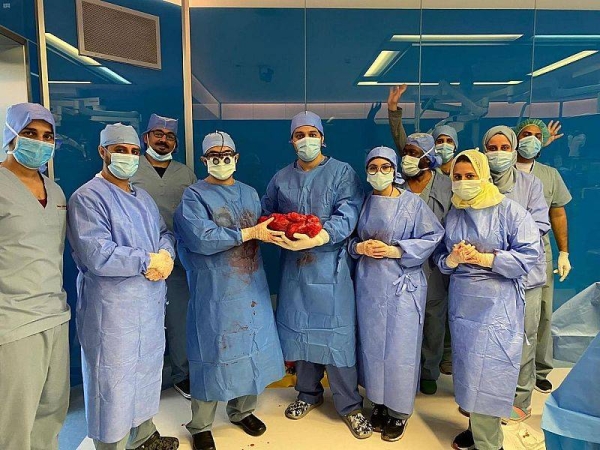 Test conducted lead to the operation

Initially, several test and observations were conducted to analyze the condition of the patient and the tumor which was growing inside the abdomen of the patient.

According to the medical team, the tests lead to the conclusion that the removal of the tumor was necessary. Hence the woman was called to get the operation.

The tumor weighs more than 7 kg

The successful surgery was performed by the medical team lead by Dr. Saad al Awad. The team successfully removed the tumor from the patient’s abdomen.  The tumor weighs 7 kilograms and 385 grams.

The surgery was successful and the condition of the patient is also stable. Dr. Al Awad also appreciated the role of the medical team who participated in performing this successful surgery and saving the life of the woman.