Zaher Sammak who is a Palestinian national has set an example of care and kindness. He dedicated 5 months to rehabilitate a dog whose back was broke. Sammak is a resident of Saudi Arabia who was born in Riyadh and has grown up here.

Currently, he works for an advertising agency and was informed by a social media follower about a stray dog who was in poor condition. His back was broken and it felt that a motorist had run over him, breaking his backbone and not even providing the poor creature with any medical help.

The dog was partially paralyzed

Sammak reached the destination to locate the dog and immediately found that it was in pain. He was partially paralyzed, sitting near the water cooler located just beside the mosque. The dog was immediately rushed to a vet as he was having difficulty breathing and it showed he was in pain. 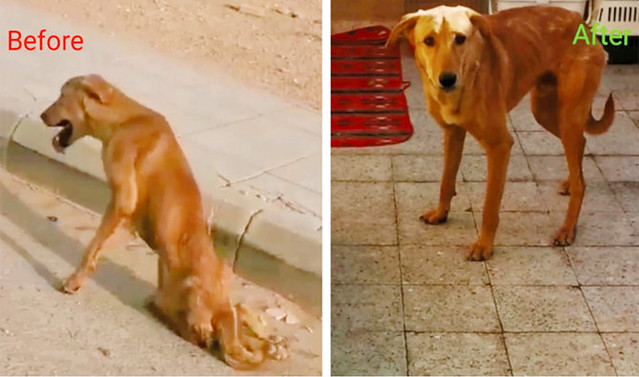 The vet, however, showed no hope in its recovery and recommended to give it euthanasia shot to end its pain and life. Sammak was not ready for this: he could not let the animal die and just took the animal with him to his home. Recommended: 7 best pet and vet clinics in Riyadh

He took the dog home

At home he took special care of the diet of the stray dog: it was given a nutritious diet filled with calcium to help repair its bones. Its diet included daily analgesic, anti-inflammatory, and B-complex vitamins.

Sammak would wrap his back so that it would have the support and would take him out for a walk.

By the time, the dog was all healthy again. He posted about the dog on his twitter account which received 1.9 million views, 30,000 retweets, and 62,000 likes.

Sammak is surprised to see such an overwhelming response and has urged his followers to be kind and merciful to animals as it is recommended in Islam. He pointed out that animals can be the reason for one’s entering heaven or hell. Worship is not all about prayers, it is also about taking care of living ones.

Sammak’s interest in an animal goes back to his childhood days as his father would always appreciate his children to be kind towards the helpless creatures.

His father would tell them to provide animals with water in summers as they are thirsty and die to thirst.

He says, he helps animals for free and when someone tells him about an animal who needs help, he helps them without charging a penny.