He continued his job despite poor weather conditions: A video clip of a street cleaner went viral last week in which he was seen doing his job during the flood that hit Makkah. In the video clip, we can clearly see the sweeper trying to clear the path of the drains to let the flood water out of the road.

This video clip went viral and people of the Kingdom hailed him for his work. However, on the other side, Makkah top authorities also honored the Expat Street cleaner who bravely did his job and refused to take rest despite poor weather conditions and the time when water entered the city.

The single clip melted thousands heart and people saluted him while some thanked the Makkah authority for their decision of honoring him. One of the Saudi users thanked the authorities for honoring their loyal employees and also mentioned that there are also many others like him who to deserve to be honored. 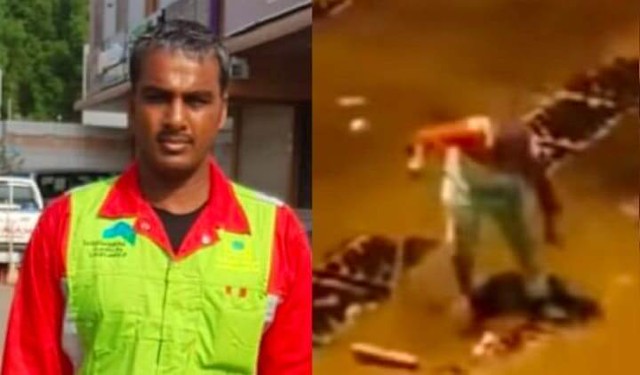 Municipality kept it discreet: On the other side, some people were upset that the municipality did not mention his name and hoped that one day Allah Almighty will make him popular and people will know his name. They prayed to Allah Almighty to reward him for his good deeds.

One of the users said if you truly want to show your gratitude to such people who work in this profession with extremely low wages then the best way is you should increase their monthly salary.

They are also human beings: At the end, I must say that we should truly cooperate with such people and show our love and gratitude to them because we are unaware about the harshness of their life and one thing we all know is that a well and stable man will never select the job of a street cleaner for himself.

We need to understand that they are also human beings. In an earlier post, we have shared the love story of Babu – a street cleaner who cries every day after the duty. It shows they have feelings, responsibilities, and emotions just like any other person.