How many of us would like to have a lion as a pet animal? I mean this would be a crazy idea! But then, we do have people who are a bit crazy and get into a habit of petting animals that are wild and unsafe to have at home. Some Saudis do have a love for lions, and many have been under limelight over it.

Can we have a lion as a pet is yet another question, but can we take them out for a ride? Is it safe for other people? We can take cats and dogs for a walk as they have been trained not to harm others, but can we train a lion likewise? Recommended: A lioness attacked and killed a man in Saudi Arabia

He was seen in the western Jeddah

A Saudi man was just seen with his “Pet” lion on the roads of Jeddah. The man, who has been identified as a Saudi national, was witnessed with his lion walking down the Western city of Jeddah. People witnessed him outside a famous cafeteria and called upon the authorities. 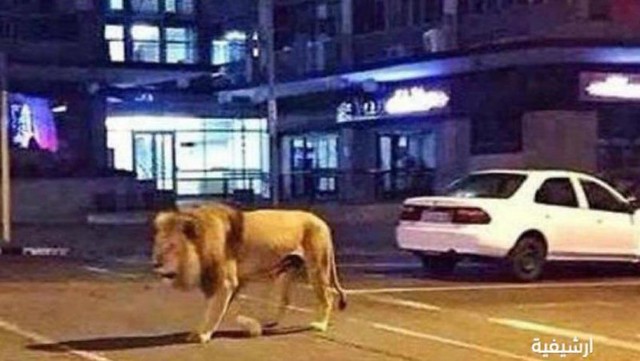 The Saudi has been arrested

The police started patrols to locate the man and were finally able to aught him red-handed with his lion in his car! The animal has been handed down to the city’s municipal authorities, the paper said without further details.

The Saudi Wildlife Authority has repeatedly assured that rearing and trading wild animals are against the Saudi laws and people shall not get involved in it!

It is illegal to rear wild animals such as lion and snakes within the premises of Kingdom. The police are investigating the case.

Unfortunately, this is not the first time we have seen this kind of event on the streets of Gulf countries. There have been many instances when people were spotted walking and carrying wild animals as their pets. We have shared one such event below.

We need to understand and realize the fact that by carrying these wild animals to the general public, we are putting the lives of many innocent people at stake who have no interest in watching your pet animals.