Nupur Sharma, the spokesperson of the Indian ruling party BJP has made an insulative and abusive statement against Prophet Muhammad ﷺ and his wife Aisha رَضِيَ ٱللَّٰهُ عَنْهُ in a live TV show.

The comments were so abusive and immoral that they created outrage in India and the entire Muslim world.

Prime Time debates in India have become a platform to encourage hate mongers to speak ill about other religions. @TimesNow's Anchor @navikakumar is encouraging a rabid communal hatemonger & a BJP Spokesperson to speak rubbish which can incite riots.
Shame on you @vineetjaintimes pic.twitter.com/lrUlkHEJp5

The response by Muslim Ummah

Riyadh described Nupur Sharma’s comments as “insulting” and called for “respect for beliefs and religions.”

Kuwait had also summoned India’s ambassador amid widespread calls on social media for a boycott of Indian goods in the Gulf.

#Statement | The Ministry of Foreign Affairs expresses its condemnation and denunciation of the statements made by the spokeswoman of the #Indian Bharatiya Janata Party (#BJP), insulting the Prophet Muhammad peace be upon him. pic.twitter.com/VLQwdXuPuq

Upon registering the protest by Muslim countries, BJP has suspended Nupur Sharma. BJP has also stated that her views are contrary to the party’s position. 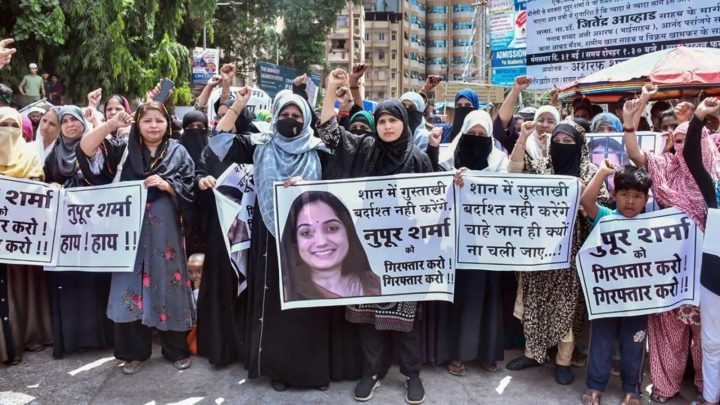 Nupur Sharma said on Twitter that her comments had been in response to “insults” made against the Hindu god Shiva.

“If my words have caused discomfort or hurt religious feelings of anyone whatsoever, I hereby unconditionally withdraw my statement,” she said.