Home Social Issues Poor People of Saudi Arabia Sarfaraz Nawaz: An expat worker who lost his legs in an accident...

Sarfaraz Nawaz, a 44 years old expat worker who came all the way to Saudi Arabia to try his luck 6 years ago, met an unfortunate accident in June 2018. He was hired by a contract company in Madina and used to work as a shovel operator. He has been working for the company for 6 years.

One of his legs has been imputed: This year in June, Sarfaraz met an accident within the company’s premises at the Yanbu Road of Aziziah District. His both legs got severely fractured and injured. The doctors had to amputate his left leg due to severe and unrecoverable injuries.

Sarfaraz gave an interview in which he said that the accident was deadly which involved the concrete mixing machine. He now has pain in his other leg which is badly fractured and according to doctor’s opinion, the right leg might as well be amputated.

My life changed overnight: He also told about how miserable his life has become after the accident as he is now dependent upon others for food and even for going to the washroom. The man who would provide labor services for hours cannot even go to the washroom on his own.

His friends and colleagues have been helping him since the accident. He said that he did not receive any salary since he was hospitalized. He got discharged from the hospital after 3 months. Since then he has no work and no salary. 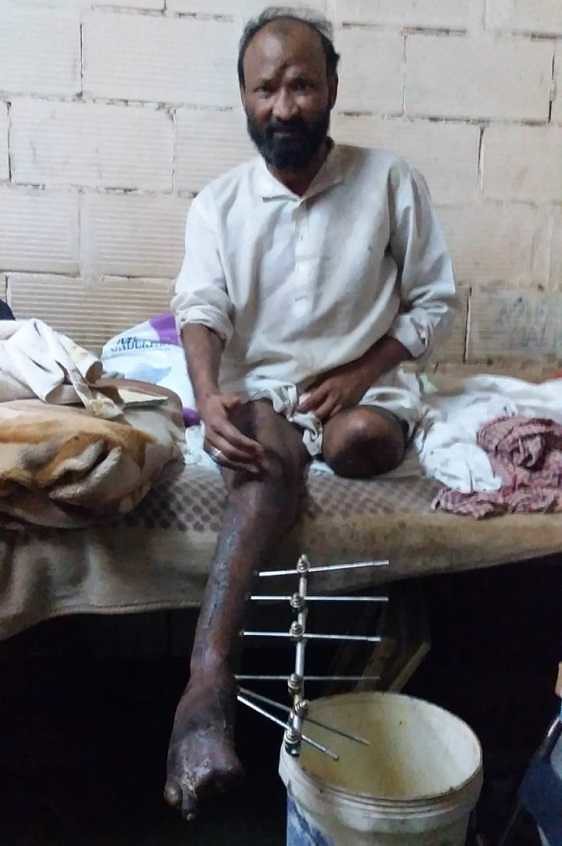 He praised the efforts of his colleagues Sanjay Singh and Wajiuddin who help him in all his works. Sanjay would come during his lunch break to feed him while both help him to go to the washroom.

Now, Sarfaraz wants to go back to his own country and initiate a treatment there. He is unable to work, and his accident has caused hardships for the family. Getting himself treated here without salary is not possible for him.

He came to Saudi Arabia so that he could save enough for his daughter’s marriage. He is very worried about his daughter as she is to get married and marriage requires money!

He says that he wants to get help so that he would return to his country and rejoin his loved ones. There he shall get himself treated and start working for the future of his family. May Allah Almighty bless the bed-ridden worker and his family!

Mohammed Sohail: Guys, He met with an accident and lost his both the legs. His name is Sarfraz Nawaz, he is from Bihar (India) working in Audha Al Beladi Madinah and his passport no is J1187018 and mobile no is +966556257286, my friend called him and personally visited him last week at the labor camp situated 30km from Madinah on Yanbu road and see the actual situation.

He is really in a bad position, no help from the company, no salary/aids from last few months, horrible conditions. He needs help as much as possible. I urge you guys to help him and contribute as much as possible from your Zakat, Sadaqa funds etc. Thanks