Proposing in fancy style is always highlighted. The net is flooded with videos and pictures depicting new and amazing proposal ideas. While proposing someone you love, you need to put up an effort. An effort that would impress the other so much that they can’t utter “no” to the proposal.

An effort has to be made so that the proposal gets accepted. Traditionally, men are the ones who ought to propose the girls. In movies, we would see men proposing their loved one in a public place. Decorating the place, holding flowers, bending down on knees and giving forth a ring is basically what a traditional fancy proposal is.[irp]

It does take guts to propose in a public place: you know there is always a chance for a “no”. But sometimes you need to take risks! Women, mostly do fall for it. A woman would love to marry a man who would be daring and would express his love.

Yet this style of proposing has become too mainstream, therefore Captain Richard came up with a new idea to ask his love one to share a life with him. He ought that many people have proposed their loved ones on land, so he shall seek the sky for this purpose. And he did! 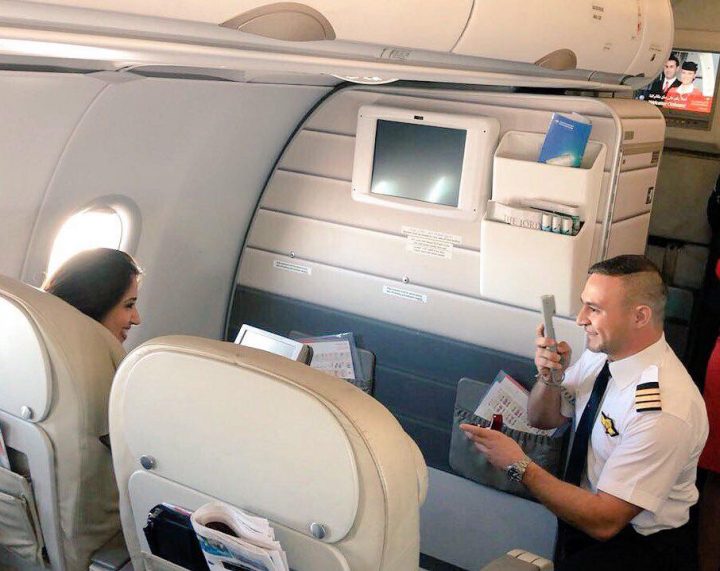 Captain Richard, an assistant captain at Royal Jordanian flight that took off from Amman and landed in Dubai, proposed his lady in the air! While he and his love one were onboard, the captain thought it was the perfect time to propose her.

He went forth to his girlfriend and announced that today’s flight is an important flight for him. His love is onboard with him. He then bent down on his one knee and proposed his girlfriend. He was equipped with a beautiful bouquet of flowers and a shiny ring.

The love was in the air and the girl said yes! People onboard started to congratulate them. They became hit on social media soon after the Jordanian carrier posted their photographs on their social media accounts.

On the official Facebook page of the carrier, their pictures were posted with a wish that they enjoy happiness forever.  The captain and the girl who is very close to his heart were congratulated by social media users. There were tons of wishes for them. Some men even asked for advice of captain for a successful marriage proposal. Some female users took it to another level and declared that they would marry a guy who would propose them in a similar way. Well, captain, it looks like you have set a benchmark for many! We wish you and your girl and happy life ahead!

100-year-old Saudi who lives near his lover’s house