Holy Prophet Muhammad ﷺ used to wear a ring that he used as a stamp/seal with an inscription written on it “محمد رسول الله“. Here are 6 facts about it;

Inscription on the Ring

The inscription on the ring of the Holy Prophet Muhammad ﷺ was written in three lines: 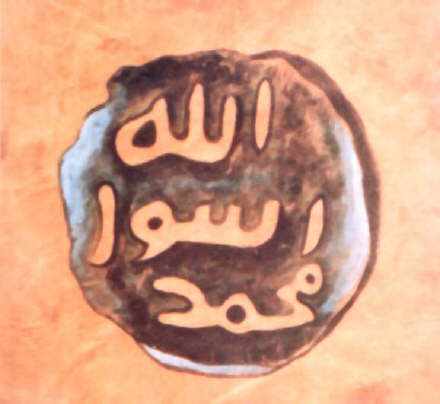 Prophet Muhammad ﷺ has used different stones in his life but the ring with the seal was of silver, and its stone was of silver too.– Sahih al-Bukhari 5870

Prophet Muhammad ﷺ did not take any formal education, he didn’t know how to read and write, hence he had this ring made into his signature seal.

He had so much love and respect for the Almighty Allah that he did not allow his name to be written above the name of Allah. In contradiction to the regular way of reading which is from top to bottom, the inscription on the Prophet’s ring was made a bottom to up.

It was used even after his Death

Ring was lost in the Well of Aris

The original ring of Prophet Muhammad ﷺ was lost when it went down the well of Aris during the caliphate of Uthman رَضِيَ ٱللَّٰهُ عَنْهُ.

Uthman رَضِيَ ٱللَّٰهُ عَنْهُ had been sitting at the well of Aris. He removed the ring and started trifling with it. Suddenly it dropped it into the well.

They kept going to the well with Caliph Usman for three days in search of the ring. Finally, the well was also drained, but the ring could not be found.

The seal which is placed in the Topkapi Palace, Istanbul had been made after that, which is the exact replica of the original ring which had never been recovered from the well.

Forbidden to wear a similar ring

Prophet Muhammad ﷺ said: I have got a ring made (for myself) and engraved a certain engraving on it so none of you should get such an engraving on his ring.”- Sahih al-Bukhari 5874