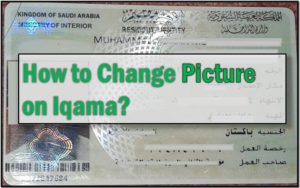 Procedure to Change Picture on Iqama of Adult: KK Yasir: Dear I changed my picture on iqama after I have a beard, when I entered in KSA I don't have a beard but later I have decided to have a beard, so after having a beard I was having difficulties in all govt. offices then I went to Jawazat in Abha to change my pictures on iqama. You just need to inform the person who is sitting in the Jawazat with a camera installed in front on him and he also have a fingerprint scanner, you have to give new fingerprints to him and he will take a new picture of you and will update the record. After that, you will give your old iqama to him and he will ask another person to print new iqama with updated picture. It is better to change the picture at the time of iqama renewal as with the renewed iqama your pictures will also be updated. It depends on the mood of Jawazat person if he will update your picture at 1st visit else you have to request him much time or you need some source in Jawazat to get a new picture.

Procedure to Change Picture on Iqama for Kids: At the time when you apply for the iqama for children for the very first time after his or her birth, you give pictures to the Jawazat officers which are posted on the Iqama. The procedure to apply for the first iqama of the children after birth is explained in these links.

Every year at the time of renewal of iqama, you have to produce pictures of the children to the government relations officer of your company. These pictures are just a formality. These are not replaced on the Iqama every time. So, the picture on the iqama of your child will remain the same (1-month-old) even if he is 4 years old. The procedure to renew Iqama is explained in this link “How to Renew Iqama”

After giving the pictures to the government relations officer of your company, just emphasize upon replacing the picture on iqama of your children. If you don’t emphasize on it, never expect them to do it themselves. I hope they will change it for you.

If they don’t change the picture on Iqama of your children, you still have the right to go to Jawazat yourself and initiate the process. There will be a form which you need to fill and sign since you are the Kafeel of your child. The agents sitting out of the gate of Jawazat will be able to help you in this regard. It is a simple process which will not take a long time.

Procedure to follow if Saudi Iqama is lost in Bahrain

Changing Name on Iqama after changing name on Passport

Procedure for Replacement of Damaged Iqama