Muslims offer eclipse prayer (Salat ul-Kusuf) on Lunar and Solar Eclipses. What is the concept of the eclipse in Islam? Why and how do Muslims pray for it?

Concept of the eclipse in Islam

In different religions, people associate lunar and solar eclipses with unhappiness or the wrath of God. However, with the latest science, we know that it is a natural phenomenon and that’s what Prophet Muhammad ﷺ told us 1400 years ago.

Prophet Muhammad ﷺ said: The sun and the moon do not eclipse because of someone’s death or life, but they are two signs amongst the Signs of Allah. So, if you see them, offer the (eclipse) prayer. – Sahih al-Bukhari 3201 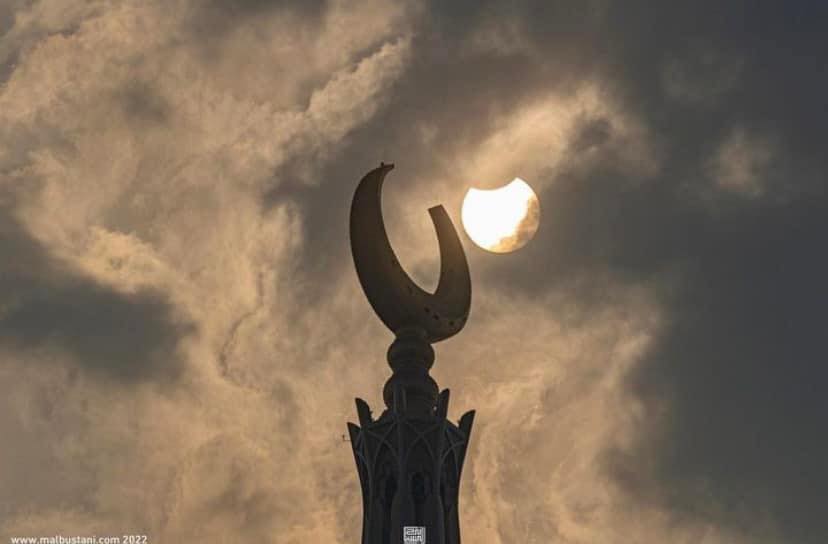 Nafl or Sunnah? Two nafl of eclipse prayer is Nafl which is performed in the congregation by Muslims.

Time: Two nafl of Salat ul-Kusuf shall be offered at the time when you see the lunar or solar eclipse in the following manner; – Sahih al-Bukhari 5197

2- Surah Al Fatiha is recited loud along with a lengthy surah. Aisha رضي الله عنها narrated that the surah recited in the first rakat had an approximate length of Surah Baqarah. – Sunan an-Nasa’i 1481

3- The Imam then calls out the Takbir and goes in a long Ruku1.

4- After that, the Imam says ‏ سَمِعَ اللَّهُ لِمَنْ حَمِدَهُ and stand for a long time.

5- While standing straight, Imam recites Quran but the duration is less than that of the first Qiyam.

6- After that the Imam goes for a long Ruku2 but the period was shorter than the period of the first ruku.

7- Then Imam stands up and then goes for 2 Sujood.

8- Again he stands up, but this time the period of standing is less than the first standing.

9- Then he performs a prolonged Ruku1 but of a lesser duration than the first.

10- Then he stood up again for a long time but for a lesser duration and recites Quran.

11- Then he performs a prolonged Ruku2 but of lesser duration than the first.

12- Then he again stands up, and then goes for Sujood, and then finishes his prayer. By then the sun eclipse had cleared.

There is no Adhan for Salat ul-Kusuf. An Adhan is only called for compulsory daily prayers.

Prophet Muhammad ﷺ came rushing out to the masjid one day when the sun eclipsed, and he prayed until the eclipse ended. – Sunan an-Nasa’i 1490

Well, no! Prayer shall be established upon witnessing the eclipse with your naked eyes.

Prophet Muhammad ﷺ recited (from the Qur’an) in an audible voice in the prayer at an eclipse, and prayed two Rak’at with 4 Ruku and 4 Sujood. – Sahih al-Bukhari 1065

A knowledgeable Imam can provide a sermon at the end of the prayer. He can guide the Muslims that what shall be done during the Lunar and solar eclipses. He should tell them that the eclipse is there so that they could remember Allah and fear Him.

Can we pray maghrib and Isha together?