Home Social Issues Poor People of Saudi Arabia Naveed Iqbal: The Journey of a Pakistani Expat from 2 legs to...

A Car Accident: Naveed Iqbal is a Pakistani national, who was born in Pakistan and raised in Saudi Arabia. He had a car accident on Jeddah highway just before National Guard Hospital. His friend Faisal was driving his car.

The car rolled upside down like 5-6 times. He took Naveed out of the car even before the ambulance and police person came. He lied to everyone that he was driving the car and he was sitting next to Naveed.

Injuries: His lungs got collapsed, the food he ate went into the lungs. There were many pipes inside his mouth. He was on a ventilator with a tracheostomies tube in his neck (He wasn’t able to talk for 7-8 months). 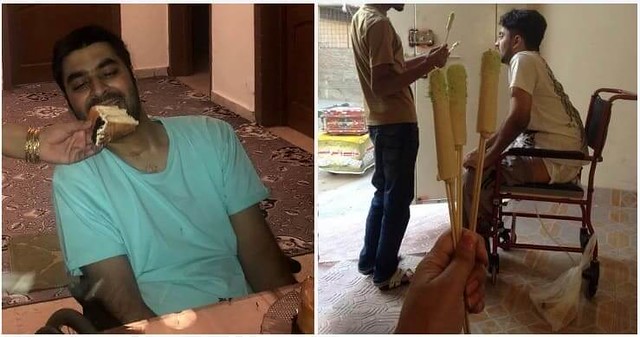 He injured his C5, C6, C7, T5 and a fracture on his right pelvis bone. His both hands, feet, neck almost nothing was working. He doesn’t have a brother. His mom and sisters used to change his sides and place a pillow after every hour (so that he will not have sores).

Till now he doesn’t feel anything below his chest till feet. His hands are working Alhumdulillah but his fingers aren’t functioning at all (only his right-hand thumb which can be maneuvered slightly)

How did he find Saudi people? After his family, Saudi people are the kindest people he has ever experienced in these 10 years. They not only helped Naveed to pick Naveed from his wheelchair to car (they even kiss his forehead & give Naveed prayers.

His Kafeel is his childhood friend, they used to go tahfeez together. He is working as a policeman now. Whenever he wants to go out for physiotherapy or for Haram, he calls his Kafeel to shift Naveed in the car. He is always there for me. May Allah bless him with more success.

What does he do? I’m a web designer at https://www.fitheme.com/  he has recently published an android app for Mecca Guide. He has physically gone on all the locations to add them to the app. Mecca Guide is a very useful app for locals and pilgrims as well. His app can be downloaded from here.

After getting a positive feedback, he is working to make an iOS version to publish on the app store. Special thanks to his family, Life in Saudi Arabia and all the people who supported Naveed in his hard times.

He doesn’t have many pictures for the time of ailment because of 2 reasons.  The first 2 years after the accident, he was having bedsore issues on his back. Most of the time he was upside down.  He was having a tracheostomies tube inserted into his neck. It was so painful that time.

Attaching a video how he types on the keyboard and how he shifts from bed to wheelchair.