A Bahraini man, who became famous for being photographed while performing Tawaf as a young boy around the Holy Kaaba while it was flooded, died at the age of 86 years old. The news of the death of Sheikh Al Awadi went viral on social media.

One of the rarest pictures of the flooding of the Grand Mosque and the Holy city nearly 74 years old is of a 12-year-old Al Awadi almost completely submerged in the water trying hard to perform the Tawaf or Tawaf around the Holy Kaaba.

The water level at Mataf was 6 feet

Al Awadi died on Wednesday in Bahrain, in accordance with the Bahrain News Agency. It was the first ever a time in the History of Islam and the world that flood water had engulfed the Grand Mosque by rising to almost 6 feet.

The flood waters left behind a thick layer of mud in the chambers of the Grand Mosque and the flooring of the courtyards. Early in 2013 while taking part in Kuwaiti TV’s Al Rai Program, Al Awadi recalled the moment which has been embossed in his memory as a sweet memory of his tawaf of the Holy Kaaba while it was flooded.

The flood in Makkah

Al Awadi stated that he was a student in Makkah at the time when the Holy city hosted great torrential rain for almost one week, day and night nonstop, which in turn caused flash floods which covered nearly all parts of the holy city.

Al Awadi added that he witnessed many people, animals, and cars being washed away by the flash floods which also destroyed many homes and shops.

On the very last day of the rains, Al Awadi along with his brother Haneef and two friends Muhammad Al Tayyib and Hashim Al Bar decided to go to the Holy Mosque and see what was going on. 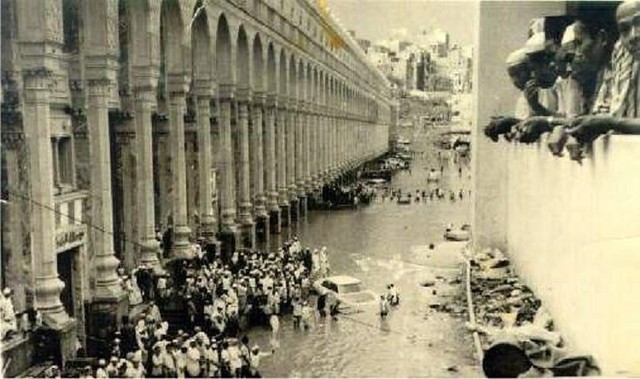 They decided to perform Tawaf while swimming

He also added that as a good swimmer he had the brilliant idea of performing Tawaf while swimming and he was immediately joined by his brother and his friends. The police also tried to stop the young boys from swimming as they thought they might steal the black stone.

Al Awadi tried to reason with the police to let him continue, while his two friends gave up trying to swim in the flood waters and sought refuge on the door of the Holy Kaaba seeking to be rescued. 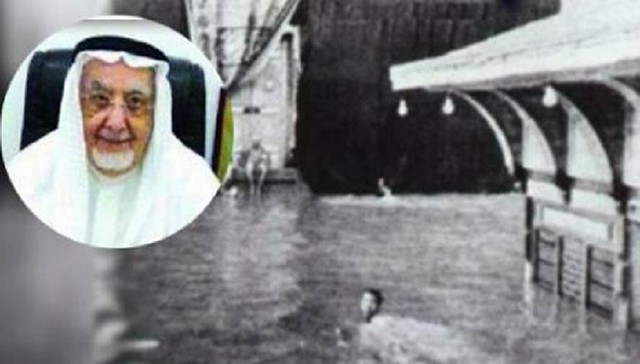 Al Awadi stated that he was both scared and overjoyed at performing the Tawaf. He was happy to have had this experience which was very rare, while he also felt scared that the policemen might shoot him down for disobeying their orders, however, he later learned that their guns had no bullets.

Nowadays many souvenir shops and museums in the Holy City have the rare picture of him performing the Tawaf in the Flooded Holy Kaaba. Even Al Awadis son saw his pictures on display when he went to perform his Tawaf and even brought back a book for his father which had his rare picture.