If you ask me about the best thing I have loved about Saudi Arabia while living here for decades, it is their legal system. They provide justice to everyone impartially no matter if the other party is a Saudi or an expat, a royal or a common man. Here is another example of such justice.

195 expats including Indian, Pakistani, Egyptians, Nepalese and other nationalities holder filed a lawsuit in the Labor office in Al-Khobar. The employees were employed by two different companies and their dues were in the form of several months’ unpaid salaries.

The companies owed over;

The companies could not pay the dues due to several reasons.

On the other side, we can understand the mental state of the expatriate who left their hometown to feed their poor families and they could hold for a long time without salaries. Thus the Labor office in Al Khobar Governorate reacted back with great attention to settle the lawsuit filed by 195 expats. 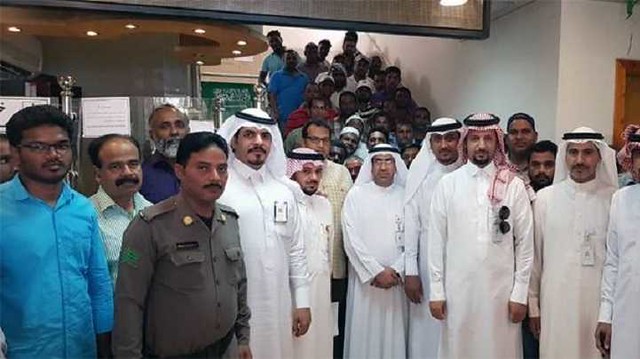 The Labor office in Al-Khobar governorate recovered a total amount of SR 8,253,043 by the companies to settle the dues for these expatriates. The expatriate workers expressed their gratitude and appreciated the justice system of Saudi Arabia for providing them a quick justice.

Undoubtedly, it is indeed an admiring act by the Labor officers. The Director-General of Al-Khobar Labor office Mansour Aal Bin Ali praised the attentiveness of the Labor office staff for their direct concern and speedy action to solve the problem.

The Labor staff came forward speeding up the paperwork of stalled companies to settle the dues of the workers fast with the directives of the Ministry Labor and its Eastern Province branch.