Home General Information Unknown Facts about the World Why were these Indian Muslims executed during World War I?

It was during World War I when the Ottoman Empire and their German Allies officially declared the war. On the call of the Sultan Mehmet V, the Muslims around the world started to prepare for the war against the British and its allies.

The World War I

The Sultan Mehmet was considered as the leader of all the Muslims living in different parts of the world as he was the then Caliph. The Caliphate system was introduced by the Muslims to govern the Muslims according to the Islamic teachings after the death of the Holy Prophet PBUH.

The Muslims would follow the Caliph and his orders at any cost. When the caliph called them for war, they started preparing for it even though half of the Muslim population was under British, French and Russian rule.

The Caliphate system ended as soon as the Ottoman Empire declined. Thereby when the Caliph recently asked to send Muslims in Iraq and Syria, the call was rejected by all the Muslims.

The Muslims, who were mainly Pathans and Rajputs who consisted of the 5th Light Infantry Regiment of the Indian Army from Madras were sent to Singapore, to fight against the Yorkshire Light Infantry.

As soon as these Indian militants reached Singapore, rumors spread that they would be sent to Hong Kong. It was unclear why would they be sent there: to fight the Muslims or end the Ottoman Empire. Things became unclear and uncertain for Muslims.

On 15th February 1915, 800 Indian Muslims waged a war against the British colonial masters, resulting in the death of 40 British officers. The Muslims had got their hands-on ammunition of the British. While on the other hand, Singapore was left practically defenseless. Most of the Volunteer Corps was on leave due to the Chinese New Year holidays.

The rebels attacked Singapore: having control of the bungalow of the regiment’s commanding officer. Two days later, the British plea for help from allies listened and they came to fight against the rebels. The Muslims militants fought back yet lost badly resulting in a significant number of causalities and captures.3 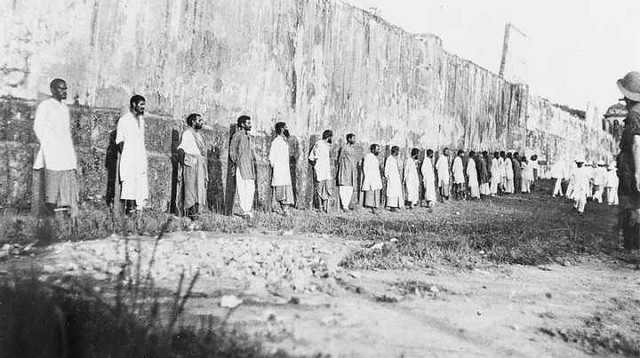 47 Indians were executed by a firing squad of 110 people

As punishment, 47 mutineers executed in a public firing by the trained squad of 110 people in front of the public at the Outram Jail. 73 others were given long-term imprisonment extending to life.

Eventually fearing death and imprisonment, these Indians wanted to flee from war at any cost. It is estimated that about 1.3 million Indian soldiers served in World War One for the British Empire.

Top 5 most expensive buildings in the world