Dowry has become a widely spread social illness in many South Asian countries, especially in Pakistan and India. The Dowry concept is quite wrong.

Dowry is said to be all the household accessories, electronic appliances, dresses, jewelry and sometimes money, a house or a car is also given to a daughter from her parent. The groom’s family think their right to demand luxurious dowry from bride’s parents.

Similarly, an Indian father, Mehboob Saab, left his home country India in 1992 and arrived Saudi Arabia to try his luck as a tailor. He was a father of four daughters and was always worried about their future and expenses to marry them because of his poverty life and insecure source of income.

Planning for a better lifestyle and to provide his daughters with a better dowry, the poor father planned to stay in Saudi Arabia to save some amount of money for his family. He restrained himself from traveling back to his home for past 25 years. 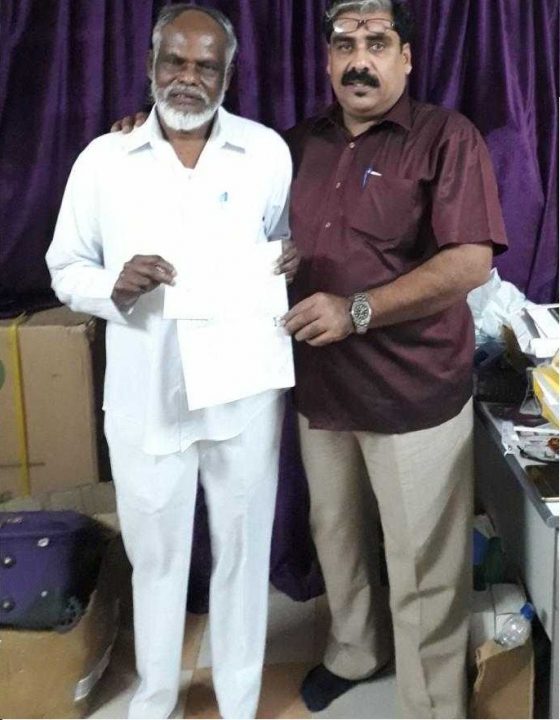 Mehboob Saab younger daughters were children at the time when he left his country, are grown up now and asked their 65 years old father to respect the Law of the land and return home and not to worry about the cost of their dowry.

In the past 25 years, the poor father worked day and night to earn some money to arrange dowry for his daughters. During daytime, he worked hard at construction sites as a daily-wage laborer and at night he worked at a tailor shop to stitch dresses.

Working day and night without caring about his own health and not sleeping for hours the respected father was able to provide good education to his children and a decent and poverty free life for his family.

He said he was not able to build a house but believed that giving better education to his girls was more important than owning any property.

He said that two of his daughters are married now and the younger two are working in some private firm and they always request him to return back and not to worry about their dowry because they are working women and can contribute their part for their dowry.

Heart touching words of a father, “My daughters barely remember my face except through photos but now with video chat facility, I was able to see those shedding tears while asking me to return home.

Mehboob Saab worked in Riyadh for many years and then moved to Dammam. He is jobless now and under constant pressure from his family, he finally decided to move back to his country after 25 years.

He remained away from his family since he arrived the Kingdom when he was just 40. At the time he arrived in the Kingdom, he was an illegal resident because there was no biometric system and this too proved to be a stumbling block for his departure.

Indian Social worker Nass Shoukat Ali Vokkam, helped him to complete the paper procedure and leave the Kingdom for good.