Thereby, when foreigners are to enter Saudi Arabia, they are hesitant. They are fearful of the drastic changes they would have to go through. They fear that how would they be able to live in a conservative environment.

A foreigner girl with Tattoos? When a foreigner, whose body is covered with tattoos, is to go to Saudi Arabia, she is more than frightened. What will happen to her when Saudis will discover tattoos on their body?

Will they be able to show off their tattoos? How would Saudi Arabia treat them because of their tattoos? And if one is a female with tattoos on her body, such fears are at maximum.

But to your surprise, there are people living in Saudi Arabia who have tattoos on their body and it is not a great deal for Saudis. You won’t be mistreated in Saudi Arabia because of your tattoos. Having tattoos is your choice, it’s your body and you can do whatever you want to do with it. 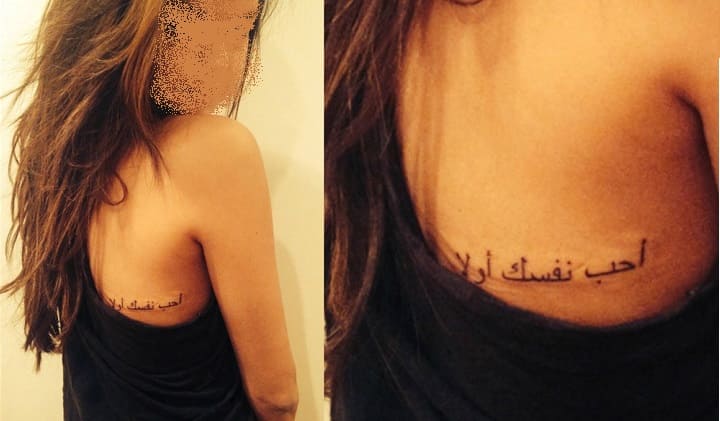 Sexy Tattoos: Tattoos that are of sexy nature such as naked men and women, tattoos depicting kisses or other such stuff might cause a problem here and it is therefore recommended not to display them in public at Saudi Arabia.

Some Foreigners living in Saudi Arabia are heavily tattooed, and this is not a great deal here. Even some expat ladies are tattooed and they can live freely here with their tattoos. The only thing is that when they are at offices, the tattoo shall be covered up. This is not a specific rule in Saudi Arabia with respect to Tattoos.

Such norms are applied and practice in the UK as well. When at work, you need to look decent! When women here at beaches or pool they can dress up the way they can, the can wear a bikini and show off their tattoo; not a great deal, the beaches here have a western outlook!

As per men, they can wear long sleeves and shorts to cover their tattoos. So foreigners with tattoos who wish to visit Saudi Arabia, fear not, tattoos are no big deal here!