Home Social Issues Ramadan How many rakat in Taraweeh prayer 8 or 20?

During the month of Ramadan, Muslims around the world perform the Taraweeh prayer. Many have confusion about how many Rakat are there in Taraweeh prayer 8 or 20?

Taraweeh is a non-obligatory prayer that is to be offered with Isha prayer during the month of Ramadan. Muslims go to the mosques where Taraweeh prayer is organized, while some prefer to offer it at home. 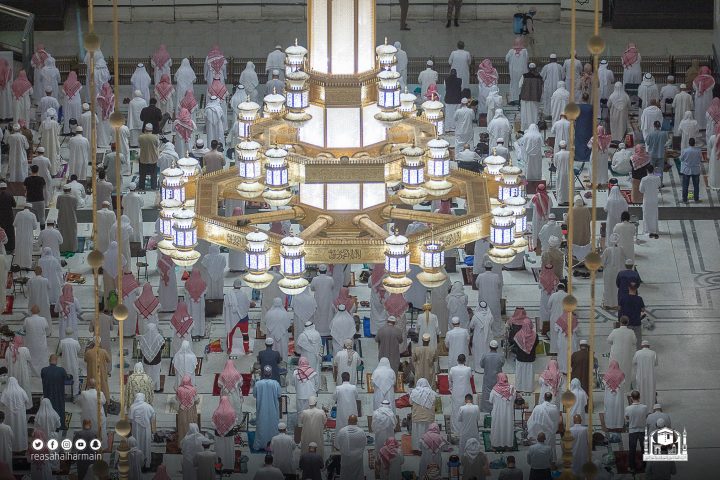 How many Rakat in Taraweeh prayer?

In the view of some scholars, 8 Rakat in Taraweeh prayer are better while others believe that 20 are preferred.

Prophet Muhammad ﷺ said: ‘Pray two Rakat at a time and then two and then two and so on, and if you are afraid of the dawn (the approach of the time of the Fajr prayer) pray one Rakat and that will be the Witr for all the Rakat which you have offered.” – Sahih al-Bukhari 472

Ibn Umar رَضِيَ ٱللَّٰهُ عَنْهُ said, “The last Rakat of the night prayer should be odd, for the Prophet Muhammad ﷺ ordered it to be so.

From this Hadith, it is evident that Prophet Muhammad ﷺ did not limit Taraweeh prayer to be 8 or 20, he has only explained the manner the rakats shall be offered.

Aisha رَضِيَ ٱللَّٰهُ عَنْهُ said: Prophet Muhammad ﷺ used to offer 11 rakat and that was his prayer. He used to prolong the prostration to such an extent that one could recite 50 verses (of the Quran) before he would lift his head. –  Sahih al-Bukhari 1123

11 rakat here mean 8 rakat of Tarweeh and 3 witr. All hadith either be narrated in Sahi Muslim or Sahih Bukhari, reveal that Prophet Muhammad ﷺ used to offer 8 Rakats in the Taraweeh prayer.

Taraweeh in Makkah and Madina

If it is a Sunnah to perform 8 Taraweeh prayers, why 20 rakat of Taraweeh is performed in Masjid al-Haram in Makkah and Masjid al Nabawi in Madina?

Actually, it was Omer bin Khattab رضي الله عنه who started the concept of 20 Taraweeh, and later it was continued during the reign of Osman bin Affan رضي الله عنه as well. This is the reason, 20 Taraweeh are performed in Makkah and Madina.

Ladies can pray as many Taraweeh prayers as they want. There is no specific number quoted by Islam with reference to how many Rakat in Taraweeh ladies should pray.

As we can see from the references given above, there is no set limit for the number of Rakat of Taraweeh in the Quran or Hadith and therefore, you can pray as much as you want.