The upcoming elections, high demand for dollar due to upcoming the declining forex reserves are the main reasons why the rupee is taking a heavy blow. The rupee dived to 133.37 against the US dollar and 35.47 against the Saudi Riyal on Tuesday marking the record devaluation of the rupee.

PKR is the worst performing Asian Currency: The State Bank of Pakistan had left the rupee to the market forces which became the main reason for the fall of the rupee. The central bank was not in the position to support the rupee due to a number of reasons like the proposed IMF plan, poor forex reserves and increasing current account deficit.

The rupee has become the worst performing Asian currency because of being devalued for the 5th time in 7 months by the State Bank of Pakistan. The rupee has dived down by 30% percent and analysts predict that it will continue to devalue in the second half of October 2018 as well.

The situation in Pakistan due to the upcoming repayments of loans is very critical. The government has already decided to go for the IMF bailout package which will further devalue the currency. 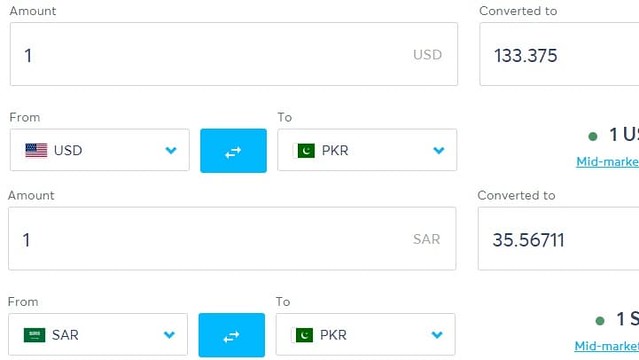 Will the devaluation continue? It is therefore expected that the rupee will take a further dive by the end of 2018 and the USD will reach around 145 i.e. the Saudi Riyal will be exchanged with PKR 39.

The IMF has just concluded its visit to Pakistan for the bailout package and one of the conditions to grant this loan to Pakistan is to devalue the currency to its real value which is according to IMF is 145.

What is the reason of devaluation? The reason for the downfall of the rupee is the high imports, poor forex reserves and low imports. Moreover, the prior government of Pakistan has always managed the currency rate artificially which caused the speculators to make money out of it.

Pakistan also has a huge balance of payment which also adds to the deteriorating economic conditions. Imports in Pakistan continue to increase as people do not stop importing items even though the Government has imposed a huge amount of taxes on them.

What can Non-Resident Pakistanis do to manage their savings? The dive of rupee against the dollar concerns many overseas Pakistanis. Many of them have lost a lot of money due to foreign exchange losses.

The best approach in these days is to keep your entire savings either in the country you have been living in or open a foreign currency bank account in Pakistan and remit over there in USD. In this way, you will avoid the risk of devaluation of the currency. I don’t think investing in property is an appropriate decision in the currency scenario.