Ustwaanah Hannaanah is the pillar which is located behind the mihrab of the Holy Prophet Mosque inside Riaz ul Jannah.

The pillar is located towards the righter side and is considered as one of the most blessed pillars as it used to be the place of prayer of the Holy Prophet. If you look at the map of Riaz ul Jannah given above, the pillar is spotted with the number 1.

Narrated Jabir bin `Abdullah: The Prophet (ﷺ) used to stand by a stem of a date-palm tree (while delivering a sermon). When the pulpit was placed for him we heard that stem crying like a pregnant she-camel till the Prophet (ﷺ) got down from the pulpit and placed his hand over it. – Sahih al-Bukhari 918 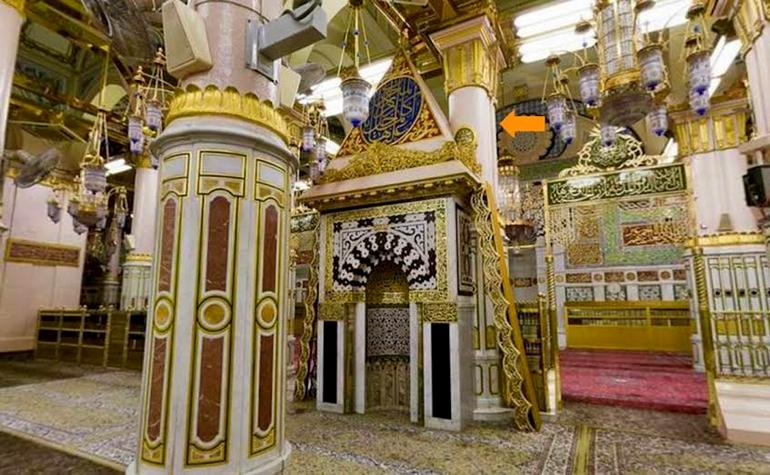 The word Sareer means the sleeping place. The reason this pillar in Riaz ul Jannah is called Sareer is that Prophet Muhammad (ﷺ) used to sleep here while making an Itikaf.

During that time, a wooden platform used to be kept at this spot in Masjid al Nabawi where we have Ustuwanah Sareer. If you look at the map of Riaz ul Jannah given above, the pillar is spotted with the number 2. 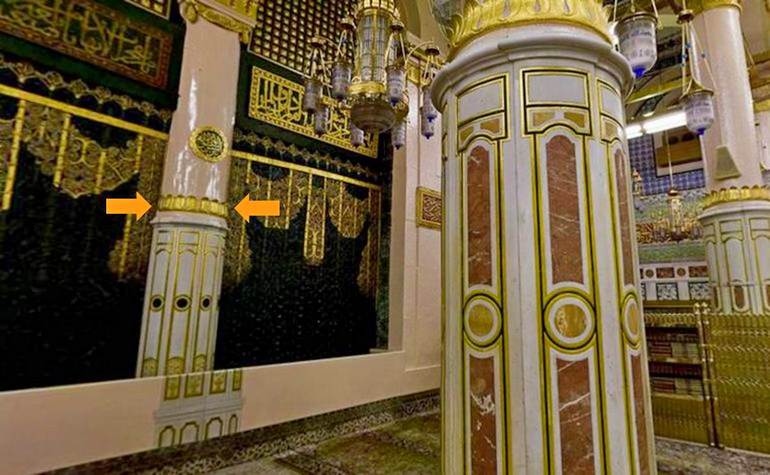 The pillar of Tawbah in Riazul Jannah is also called Ustuwana Abu Lababah. Actually, there is a great story associated with this pillar of Masjid al Nabawi.

During 5 Hijri, Muslims sieged Banu Qurayza, a Jewish tribe. Banu Qurayza had very good relations with Abu Lubaba ibn Abd al-Mundhir, R.A so they contacted him to know what Muslims are planning to do with them. Abu Lababah disclosed the plans of Muslims to Banu Qurayza.

After realizing his mistake, he became saddened and went to the Masjid al Nabawi and tied himself to a date tree saying that he shall not untie himself until his repentance is accepted by Allah and the Prophet Muhammad (ﷺ) should himself untie him.

When Prophet Muhammad (ﷺ) came to know this, he said: “If he had come to me, I would have begged on his behalf for his forgiveness but now he had acted on his own initiative so how can I untie him until his repentance is accepted.”

It is said that he remained tied for 6 nights without food and water until the day his Tawbah was accepted by Allah. Later Prophet Muhammad (ﷺ) untied him. If you look at the map of Riaz ul Jannah given above, the pillar is spotted with the number 3. 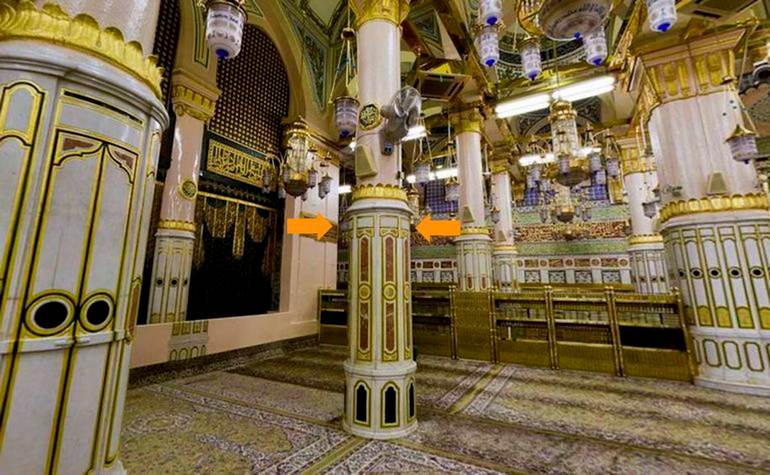 Ustuwaanah Aisha is also known as the Muhajireen pillar because the immigrants from Makkah to Madina used to sit near this spot in Riaz ul Jannah. There is a reason this pillar is called Ustuwaanah Aisha.

Narrated Aisha R.A.: Once Prophet Muhammad (ﷺ) said, “In this Masjid is one such spot that if people knew the true blessed nature thereof, they would flock towards it in such that to pray there they would cast lots (Qur’ah).”

People asked for this spot but the mother of believers refused to tell it. Later, Abdullah Ibn Zubair R.A insisted and she pointed out the location and since then, it is called Ustuwaanah Aisha. If you look at the map of Riaz ul Jannah given above, the pillar is spotted with the number 4. 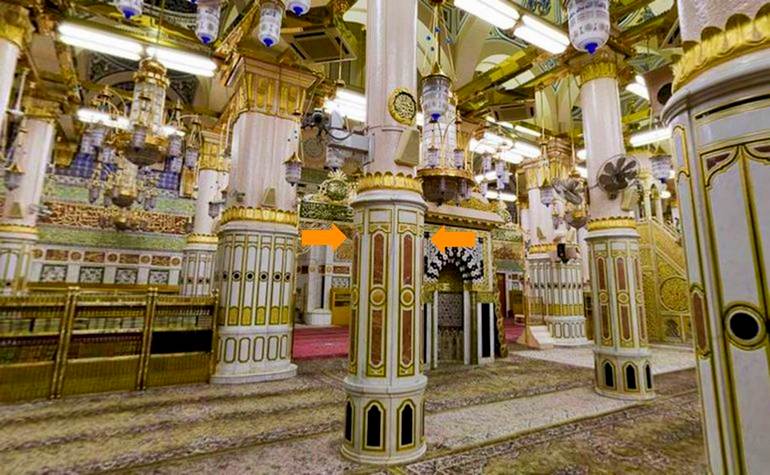 Hars literally means to watch or to protect. Once again there is a beautiful story behind the reason this pillar in Riaz ul Jannah is called Ustuwaanah Hars or Ustuwaanah Ali.

This is the place where companions of Prophet Muhammad (ﷺ) and especially Ali R.A used to sit as a gatekeeper and guard Masjid al Nabawi and the house of Prophet. If you look at the map of Riaz ul Jannah given above, the pillar is spotted with the number 5. 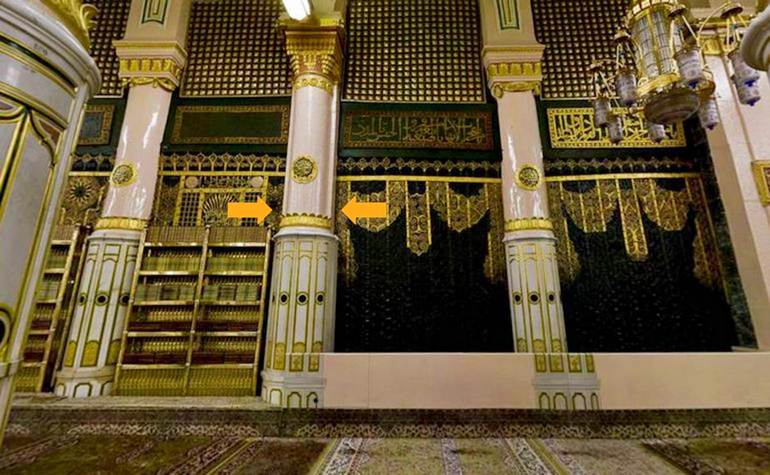 The reason this pillar in Riaz ul Jannah is called Ustuwana Wufood is that Prophet Muhammad (ﷺ) used to meet foreign delegations at this place. The literal meaning of Wufood is delegation.

Prophet Muhammad (ﷺ) used to talk to foreign delegates for long hours around this pillar of Masjid al Nabawi in which he would often teach them about Islam. If you look at the map of Riaz ul Jannah given above, the pillar is spotted with the number 6. 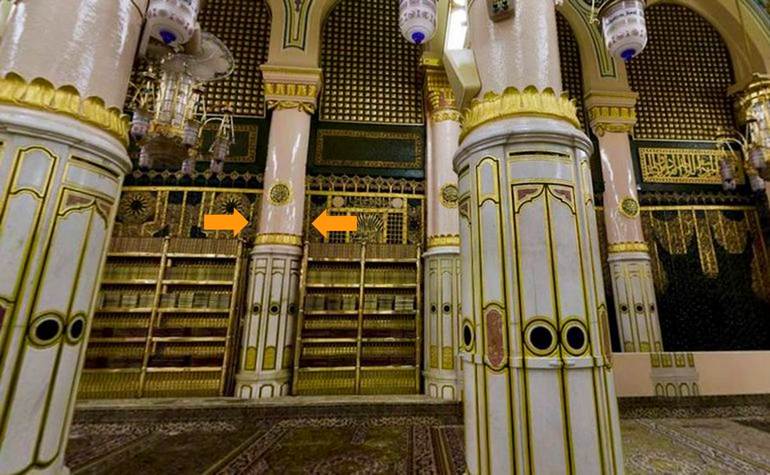 Although Ustuwaanah Tahajjud is not part of Riaz ul Jannah, it is an important pillar of Masjid al Nabawi. This was the exact spot where Prophet Muhammad (ﷺ) used to perform his Tahajjud prayers.

An indication was present in this place to pinpoint the exact location of the place where the Holy Prophet used to perform his Tahajjud, however, it has now been hidden with a bookcase or shelf. Recommended: How to offer Tahajjud prayer? 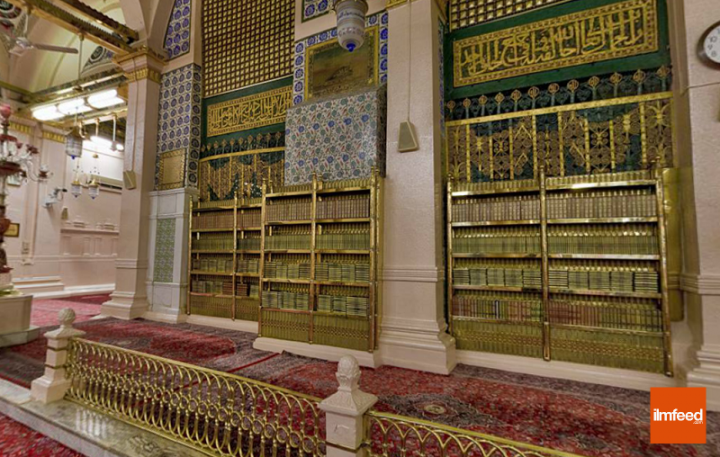 Ustuwaanah Jibraeel is the place from where the angel Jibraeel (عَلَيْهِ ٱلسَّلَامُ) used to enter Masjid al Nabawi and therefore, it is called the pillar of Jibraeel. Today, we cannot see this place as it is hidden inside the sacred chamber or Roda Rasool of Prophet Muhammad (ﷺ). 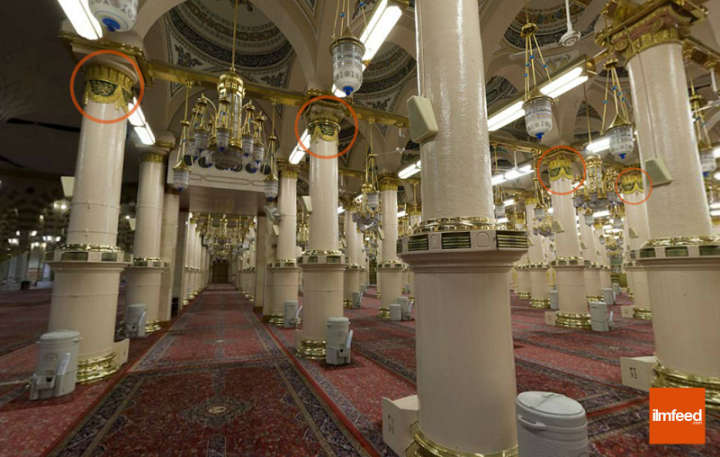 There are even some pillars inside Masjid al Nabawi which indicate the original boundary of the Mosque when it was first built. The mosque was much smaller when it had been built initially and over time and through various expansion projects the Mosque has reached the size it is today.