Masjid al-Aqsa is one of the most important mosques of Islam due to various reasons. Not only the Mosque has a special mention in the Holy Quran but also is the second house of Allah built on the Earth. The holy place is also known as the Bayt al-Maqdis which translates as House of the Holiness.

Important events are also attached to the mosque such as the Journey of the night mentioned in Surah al Isra. Holy Prophet PBUH would tell Sahabas to appreciate the holiness of the mosque. The mosque houses important landmarks and therefore is regarded as a sanctuary. Here are the landmarks with great Islamic importance, located inside the mosque:

The Fountain is a circular ablution fountain built in 1193 AD. The beautiful structure was built by Ayoubi Sultan Al-Adel Abu Bakr bin Ayoub. Lying just in-front of the dome of the rock is a fountain that is surrounded by an iron fence decorated by ornaments and embedded with stone stools.

There are a basin and the spouts used for ablution purposes. The fountain has been renovated twice. 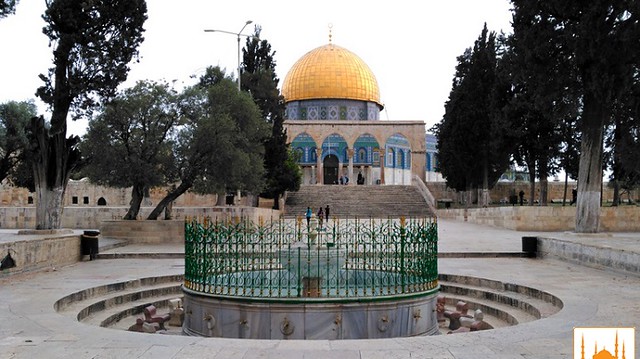 A basement is present at Masjid Al Aqsa platform and is located beneath the Qibly mosque. It is believed that the pillars made of stone located in the very basement were constructed by the Jinns during the reign of Prophet Suleman.

Most importantly, a library is present with about 130,000 books. These books along with the 4,000 donated manuscripts make the collection of this library an important one. These manuscripts were donated by some families of Jerusalem. According to UNESCO, the library houses the most important Islamic manuscripts. 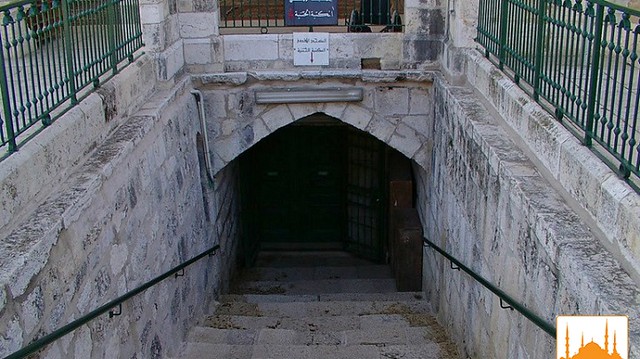 It is located in the center of Masjid Al Aqsa and just at the east of the Dome of rock. Famously known as the Qubbat al-Silsillah, the dome of the chain was built in 691 CE by Umayyad Caliph Abdul Malik bin Marwan in 691 CE. It is also known as Qubbat al-Silsillah. It is said that the dome of the chain is the most historic structure of Masjid al Aqsa.

Even though we don’t know why this dome was built, but it is believed that it must have served purposes of treasury or Prototype. Since its construction, it has undergone renovation and tile work at the Mihrab. 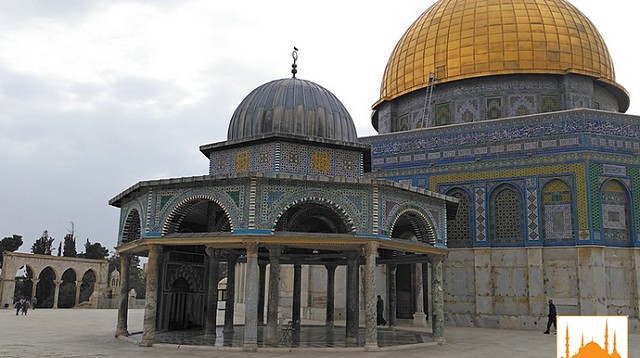 The mihrab made up of marble is placed at the Qibly mosque. The Mimbar that stands in the right is the one that was gifted by the government of Jordan after the original one placed by Salahuddin Ayyubi got destroyed due to fire that occurred in 1969.

The Mimbar that was first placed was a great piece of art so much so that it is declared as the most beautiful mimbar of the world. The Mimbar was made up of interlocking wood pieces of great quality wood such as Cedar. Moreover, there were pearls and ivory fixed to it without using glue or nails. 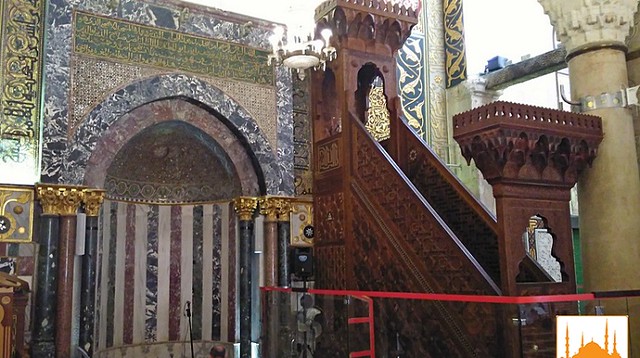 During the rule of the highly renowned, Ottoman Sultan Sulayman the governor of Gaza and Jerusalem named Mohammad Bek built the prayer niche at the very spot where the dome is now located. However, a dome was built over the niche that is supported by 8 pillars on the orders of Ottoman Sultan Abdul Al-Majid. 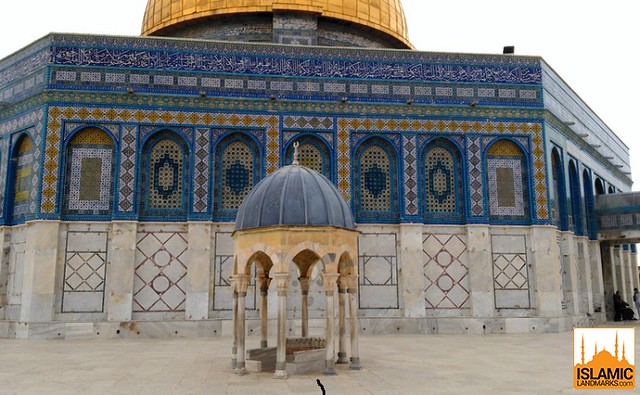 Al Khidr was a pious and a nobleman who has a special mention in the Holy Quran (18:65-82). Al Khidr also met the Prophet Musa A.S and both had an interesting meeting.

A dome which is hexagonal in shape which lies at the northwest of the dome of the rock is named as the dome if the Al Khidr as it is believed that the righteous man used to offer his prayers there. However, there is no authentication to the belief. The dome that rests on six pillars of marble also houses a red prayer niche. This prayer niche is built with red stones. 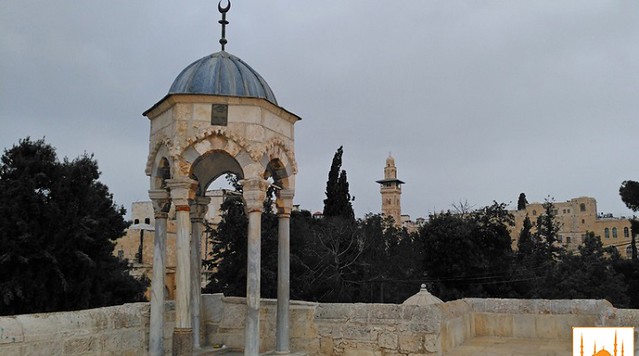 The dome of spirits rests near the dome of Al Khidr. The octagonal dome is supported by 8 pillars. Each pillar is attached with an arch which firmly holds the dome’s base.

The dome of spirits is believed to have been built on the 10th century. The dome is used to offer zikr by Sufis and the public. The Sufis visit the dome on and off and get engage in zikr. 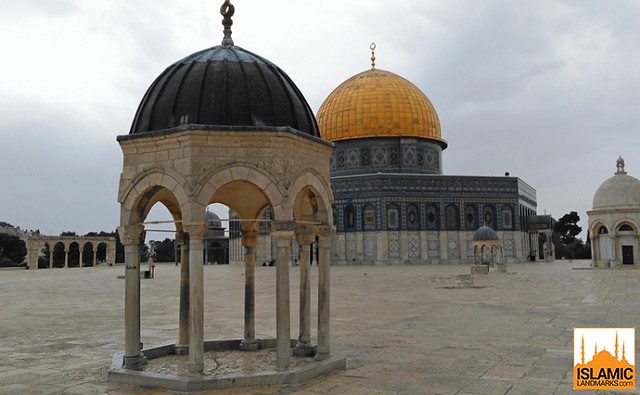 The dome that is located in the north of the Masjid Al Aqsa is named as the dome of the lovers of the Prophet PBUH. Sufi Sheikhs would often sit at the very spot and get busy in praising and remembering Allah Almighty.

The Ottoman Sultan Mahmud II got the dome constructed in 1808 AD (1223 AH). A Mihrab is also placed in the dome which is supported by 4 pillars. The dome is built on a raised platform. 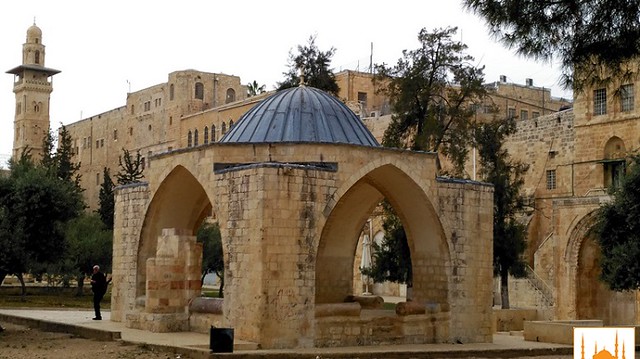 The eastern wall of the Masjid al Aqsa has affixed Golden gate. The gate, which is alternately known as the Bab ad-Dhahabi is there since medieval times. Even though we are not sure about the date, yet it is believed that the gate was carved out some time between the late Byzantine to early Umayyad times.

One of the two gates of the Golden gates is known as the Mercy gate (which is in the south) while the north gate is known as the Repentance gate. As the Ar-Rahman (the mercy) is the graveyard located in front of the Mercy or the Ar Rahman gate.

The graveyard houses two graves both belonging to the companions of the Prophet PBUH named Ubadah bin Samit and Shaddad bin Aus (may Allah be pleased with them).

In 810 CE, the Muslims closed the gates, yet the Crusaders opened them up in 1102 CE. When Muslims reconquered Jerusalem, the gates were again walled. The gates were rebuilt by Sultan Suleiman and were later walled in 1541 CE.

The Prophet Isa is believed to enter from the very gate on his return according to Christian’s belief. Recommended: Minaret of Jesus – the place where Prophet Isa A.S. will descend 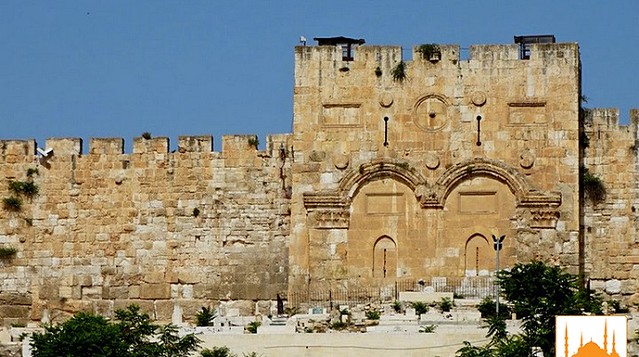 The Bab Al Maghrib or the Moroccan gate is located in along the western wall of the Masjid Al Aqsa. The gate which is alternately called as the gate of Moors is built on the ancient gate named as Barclay’s gate. The Barclay’s gate was a Herodian period gate and eventually got buried as the ground level rose.

As people from Morocco migrated to Jerusalem after the Muslims were able to reconquer it, the gate built in the 12th century was named after them. 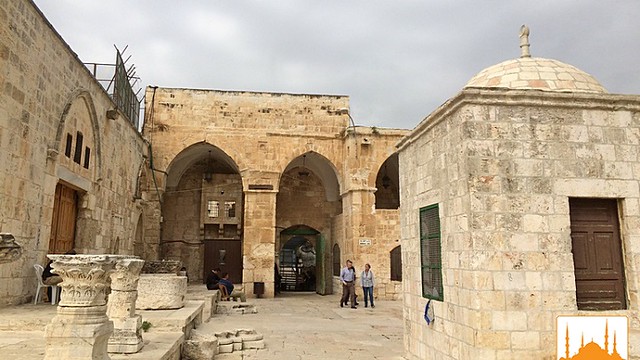 In the north of Masjid Al Aqsa, there is another important landmark structure. The structure that is of the dome is known as the Dome of Sulaiman. 24 marble pillars are supporting the octagonal dome.  A small stone was protected by iron grills as it was believed that the stone is a piece of stone of Ascension.

The dome was constructed during the rule of Ummayyads. Some people thereby believe that it was built to pay a tribute to Prophet Sulaiman while others believe that as it was built on orders of the Umayyad Caliph Sulaiman bin Abdul Malik thereby it is known as Dome of Sulaiman.

Presently, the dome is used by the Waqf Directorate as a headquarters for female preachers. 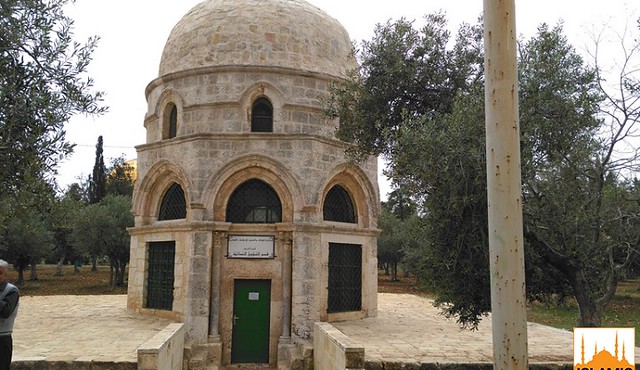 The Dome of Ascension or the Mi’raj rests behind the Prophet’s dome.  It is an octagonal dome supported by 30 pillars of marble. A small dome, that looks like a crown is placed on the dome giving it a remarkable look.

It is said that the dome is constructed at the very place from where the Prophet PBUH raise towards the heavens on the night of Miraj: nevertheless, we do not have any authentic facts supporting the claim. 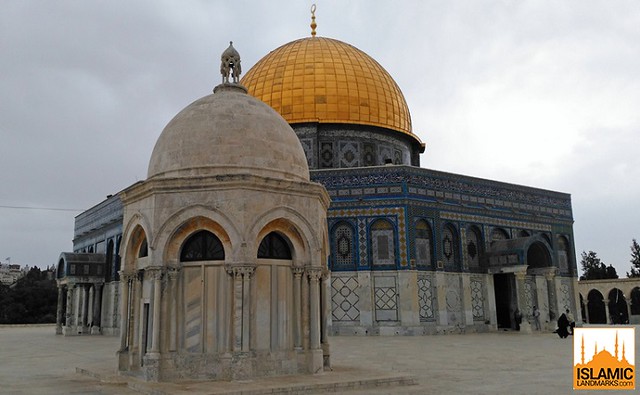