On July 2, 1990, a stampede occurred during the annual pilgrimage or Hajj. The death toll in this stampede was recorded at 1426 people. In all the Hajj tragedies of modern times, this incident held the highest death toll of all time.

The main stampede started inside the pedestrian tunnel known as Al Maaisim Tunnel which leads out towards Mina and plains of Arafat from Mecca. The pedestrian tunnel is 600 yards long and has a width of 35 feet. The tunnel was 1 part of a $ 15 Billion project started by the Saudi Government around the Holy sites of Makkah.

While the pilgrims had been traveling to perform the ritual of the stoning of the devil, a stampede erupted when the bridge railing bent and caused several people to fall off the bridge and some even fell on top of others who were trying to escape.

What went wrong inside the tunnel?

The tunnel had a maximum capacity of 1000 people, however, at that time around 5000 people occupied the tunnel. The temperature also reached up to 44 degrees C, which resulted in the ventilation system of the tunnel to, malfunction, which added to the overall death toll of the incident.

Some witnesses at the scene stated that some form of the demonstration was taking place, while others reported that the tunnel’s power supply was cut off. The official version from Saudi Arabia stated that the hysteria of the crowd which occurred due to the falling pilgrims was the main cause of a large number of deaths. 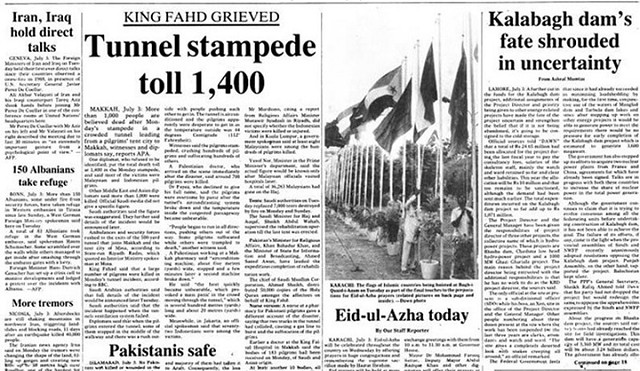 The nationalities of pilgrims who died

Most of the pilgrims who lost their lives that day were of Pakistani, Indonesian and Malaysian origin. Immediately after the incident, the Late King Fahd stated that the incident which occurred was the will of God, which is above everything else. The Late King also added that if the pilgrims had not died here, then they would have died in some other place at the same predestined moment.

Around 680 people out of the total death toll belonged to Indonesia, which resulted in the Indonesian government severely criticizing the Government of Saudi Arabia. The Indonesian officials stated that the Saudi Government cannot run from their responsibility for the disaster in the tunnel by simply saying that the incident was an act of God.

Iran also expressed grave concerns after the incident took place, although not quite to the same level which could be seen in the protests prior to the 1987 incident which ultimately led to 400 Shia pilgrims losing their lives during the pilgrimage.