The Masjid al Nabawi built by Prophet Muhammad S.A.W originally had only 3 gates Bab ur Rahma, Babe Jibraeel and Bab un-Nisa. Now with the time and several expansions made in the mosque, there are a total of 42 gates to enter Masjid al Nabawi.

On each gate, there is a stone on which the verse of Holy Quran Surah Hijr 1546 has been encrypted that is translated as “Enter with peace and security”. Today in this article we will write details about the gates of Masjid-e Nabwi. Recommended: List of gates in Masjid al-Haram, Makkah 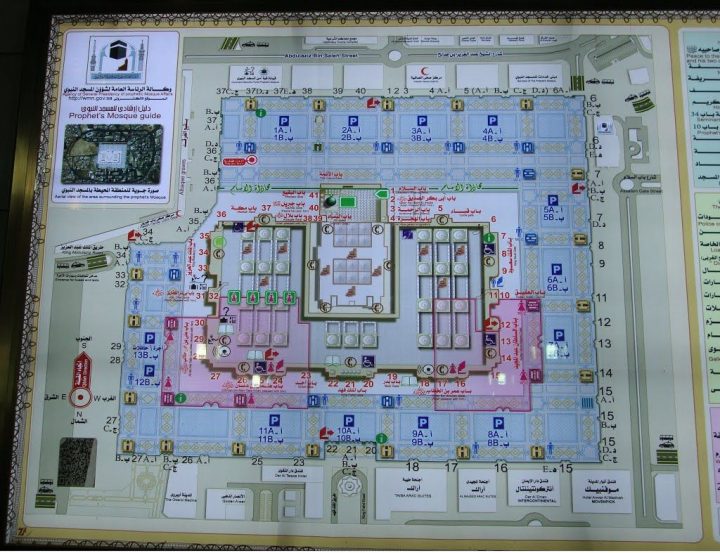 Bab as-Salam is the first gate of the Holy mosque that was built by Omar R.A in 18 Hijri 640 CE. It lies in the western wall of the mosque. However, this gate has been moved several times toward the west during various extensions.

Hence this gate is not in its original location. It is one of the first gates of the mosque. Bab us Salam means the door of peace. Men who want to visit Roda Rasool S.A.W enter the mosque from this gate.

According to ibn Hajar, “Small door is called Khukhah which was near the fifth column west of the pulpit”.  This small door opened into the mosque and this door was also moved westward during various expansion.

Babul Rahman was installed by our beloved Prophet. This was moved westward from its original position during various expansions. In the past, this door lies in front of the house of Atiqa bin Abdullah bin Yazeed and thus this door was also known as Bab-e Atiqa.

Hijrah gate is a doubled arched gate located on the left of Bab-ur Rahmah. This gate is named after the Hijrah of Prophet Mohammad PBUH. The Hijrah from Makkah to Medina that occurred in 622 CE.

Initially, this gate was installed with two portals but during the expansion of the mosque, two more portals were installed to the eastern side of this gate that increased the number of portals of this gate to four. 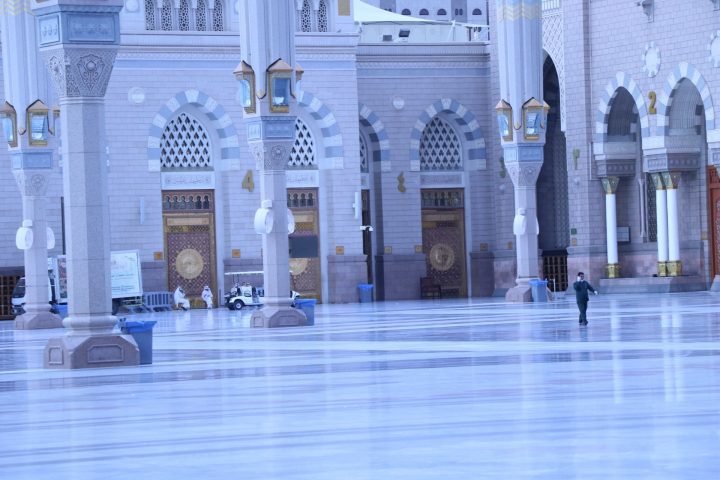 If you enter through this gate to the Masjid al Nabawi, you will find a Hijri clock. This clock rings 12 at the time of sunset. By looking at this clock, you can understand after how long it is going to be sunset. 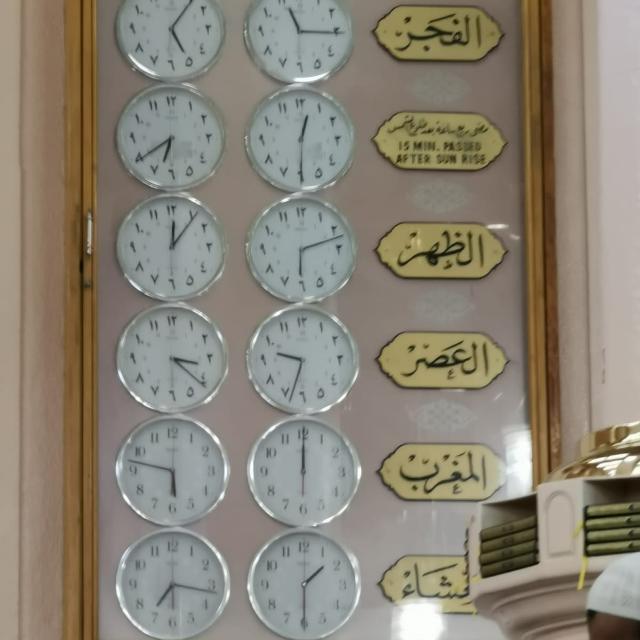 This gate is located toward the direction of Quba village. Located on the southern side of the mosque this gate is triple arched. This gateway is located in King Fahad bin Abdul Aziz block. 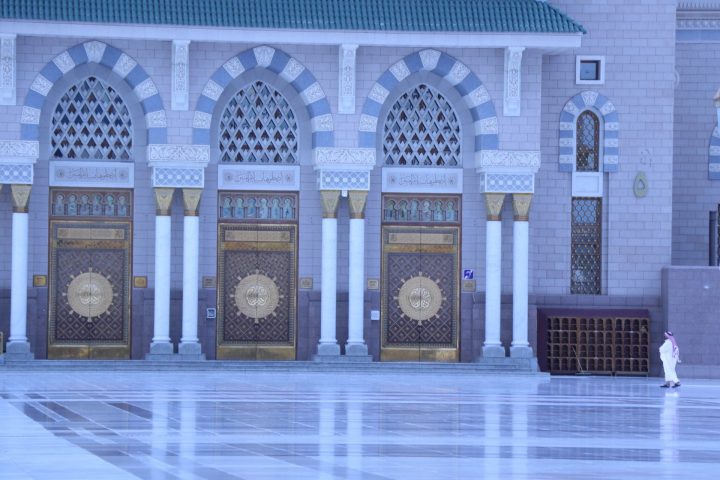 We can easily understand that this gate is named after King Saud bin Abdul Aziz. King Saud commissioned the first Saudi expansion of the prophet’s mosque.

This gate consists of two large and five small portals. You can enter this gateway from the south-western corner of King Fahad's expansion. This gateways also has one of the six tallest minarets of masjid-e Nabwi on its southern flank. 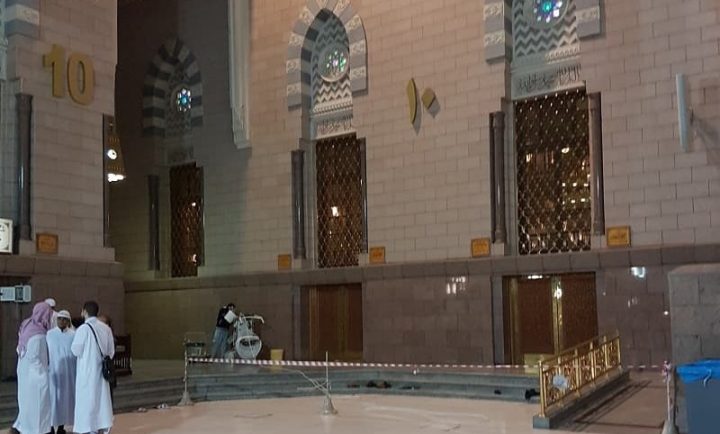 Located on the western side of Masjid-e Nabwi this gate is named after wadi-e Aqeeq that lies along the western boundary of Medina. The dwellings of several prominent companions of the prophet are situated here.

This gate is located on the northwestern flank of the mosque. This gate is named after the Ottoman Sultan Abdul Majeed.

This was the gate of the first Saudi expansion but was incorporated in the mosque during the second Saudi expansion by King Fahad. This gate has five small and two large portals. It also has one minaret that merges into Bab-e Omar ibn Khatab of Masjid al Nabwi.

The portal of ibn ul Khattab gate is located on the northwestern corner of the main complex. It has 18 portal and includes gate no 16, 17 and 18. It also offers access to the mosque’s library.

Badr gate is gate no 19 located on the northern flank of the mosque. This gate lies between Bab e Malik Fahad and Babe Umar Ibn al-Khattab. It is a single portal entrance.

King Fahad gate is named after King Fahad bin Abdul Aziz of Saudi Arabia and is the main entrance to the mosque from the north. Gate no 20, 21, 22 are named as king Fahad gate.

Gate no 23 is named Ohad gate. it is named after the valley of Ohad. This gate lies on the foot of valley Ohad. Here the barriers are foot traffic moderators that are used in high concentration areas of the mosque. 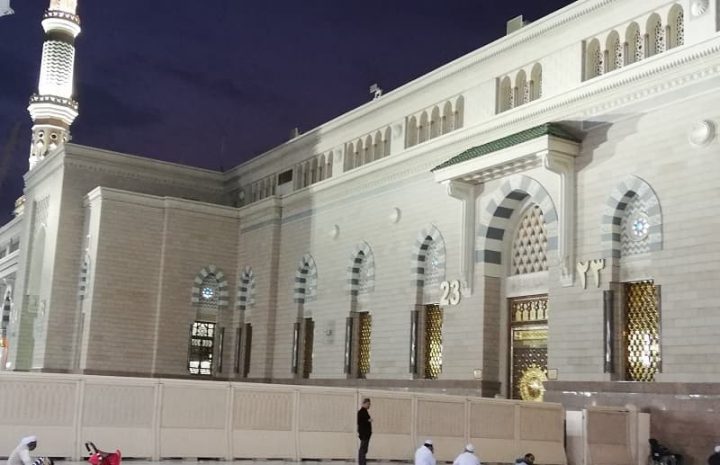 Gate no 24, 25 and 26 are named after the companion of the Prophet and the third caliph of Islam Uthman Ghani. This gate is located on the eastern corner. It is on the second Saudi expansion of northern flank. Women who want to enter Roda Rasool S.A.W and Riaz ul Jannah use gate 25 to enter.

Abu zar Ghaffari was the fifth person to embrace Islam. This gate is named after him. Gate no 31 and 32 is Abu Zar Ghaffari gate. This gate is located on the eastern flank between Bab-e Abdul Aziz and Bab-e Ali. 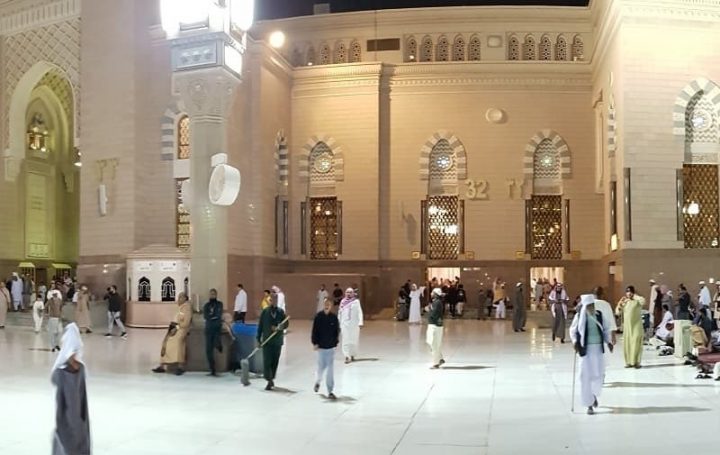 King Abdul Aziz gate includes gate no 33, 34 and 35. It is one of the largest gates of the mosque with two large and five small portals. It has two minarets on each side and is located on the southeast corner of King Fahad expansion.

Gate no 37 is Makkah gate. It is named so because it faces toward Makkah. It is located on the southern side of King Fahad's expansion. This triple-arched gate is also one of the two identical gates of the mosque. The second identical gate is Bab-e Quba. 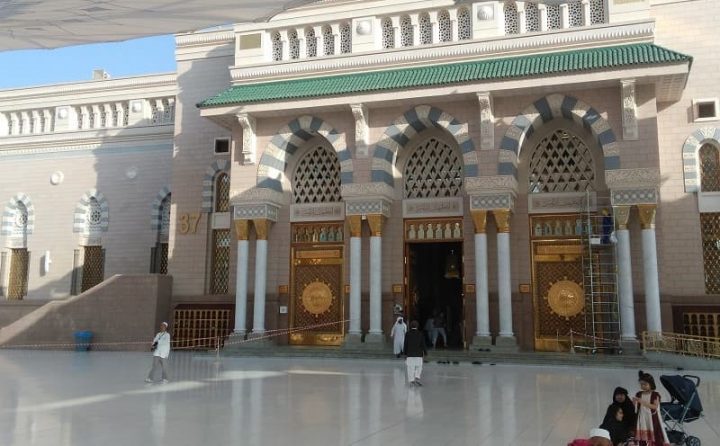 Gate no 38 is named after the first muezzin of Islam, Bilal ibn Rabah. It is a twin portal gate with a single arch over each and is located on the southern flank of King Fahad’s expansion.

Bab un Nisa gate no 39 was designated for the ladies. It was specially installed by Umar Ibn Khattab. During the time of Umar ibn Abdul Aziz, this gate was assigned for the ladies to enter or leave the mosque and until today this gate is used by the ladies.

Gate no 40 has several names. It is called as Bab-e nabi and also Bab-e Jibrael. This gate is given this name because history claims that the angel Jibrael use to enter through this gate.

It is also said that this gate does not lie in its original position as it has been moved to east during expansions.

Gate no 41 faces toward Baqi ul-Gharqad. It is located close to the Prophet’s PBUH burial chamber. It lies opposite to bab-us Salam. If you enter from the gate 1 Bab-e-Salam to Roda Rasool S.A.W, you will exit from Bab ul Baqi gate 41.

Gate no 42 is a small gate located on the southern side of the mosque. It is an entrance to the Rawdah Rasool section. Bab al Aiymah means the gate of Imams and it is also known as Bab ul Janayez. This gate is basically used by the Imams and opens up to Mehrab-i- Uthmani. 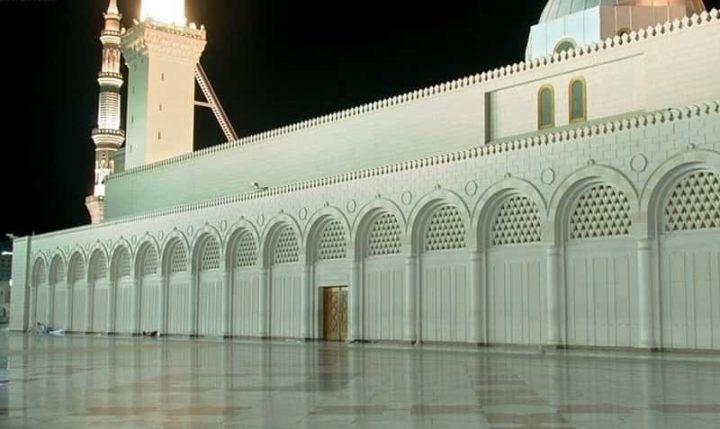