In this specific writing, we will talk about the first attempt made to steal the body of Prophet Muhammad ﷺ from the Green Dome in Madina.

Some Christians planned to steal the body of Prophet Muhammad ﷺ in 557AH/164. It was the time of a very pious Muslim ruler Nur ad-Din Mahmud Zanki.

The commander of his soldiers was Asad ad-Din Shirkuh the uncle of Great Salah ud Din, the one who conquered Jerusalem.

One night Nur ad-Din Mahmud Zank was blessed with a dream and he saw Prophet Muhammad ﷺ pointing at two people of red color hair (at their heads) and sayig, “Mahmud, Save Me from them”.

He then called his advisor Shaikh Jamal ud Din, and discussed the matter with him.

He left for Madina Immediately

Shaikh advised him to go to Madina immediately and asked him not to relate the dream to anyone else. Nur ud Din Mahmud Zanki took his advisor with him and a Historian Majd al Din. The caravan comprised thousands of camels carrying expensive gifts on them.

Mahmud Zanki reached Madina from Syria in sixteen days. He directly went to Masjid al Nabawi where he offered prayers. He was there to counter the attempt made to steal the body of Prophet Muhammad.

He arranged a feast for everyone

With the consultation of his advisor, he summoned all the people of Madina in order to present them with alms. Nur ud Din Zanki looked carefully at each of the visitors but could not see those he saw in a dream. He inquired if all the residents have received the alms.

The people replied in Yes. He asked them again and some people told him that there are two pious people who don’t accept any alms.

They feed the needy people generously, observe fast on regular basis, perform tahajjud and offer salah day and night and once a week they visit Masjid al Nabawi.

He recognized them immediately

Nur ud Din ordered the two to be presented to him. They were exactly the two people he saw in the dream. He recognized them immediately and asked them why they are there.

They replied that they are Moroccans, came for hajj, and wish to stay in Madina as neighbors of Prophet Muhammad ﷺ. Nur ud din Zanki insisted them, to tell the truth, but they kept quiet.

He asked about their residence and went there. He inspected their residence near the sacred chamber and when an old rug was lifted, a wooden board was found and under that a newly dug tunnel.

The tunnel was approaching the Sacred Chamber. They got terrified and confessed that they are Christians and the king of Iberia sent them with a huge sum of money to steal the body of Prophet Muhammad S.A.W.

They rented the house nearest to the Holy Chamber and used to dig the tunnel in the night and throw out the soil in the day.

He ordered the execution of both

They also told that when they got near to the sacred chamber an earthquake shook the earth and a fearful thunder was observed.

Nur ud Din Mahmud Zanki ordered the immediate execution of the culprits and thanked ALLAH who blessed him with the honor of saving the sacred chamber.

After this attempt, Nur ud Din Zanki ordered a deep trench to be dug around the Holy Chamber and then filled it with melted lead so that nobody could ever reach the sacred chamber again. 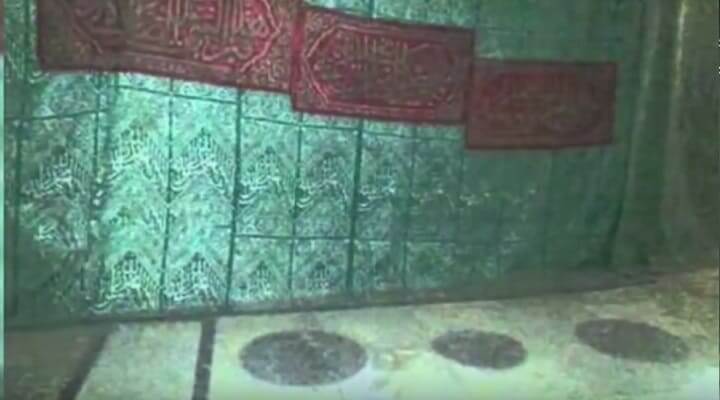 Zanki stayed in Madina and distributed charity generously to the people of Madinah. He is a trademark of Military Courage, extreme modesty, and piety. Even his enemies acknowledge that Zanki loved justice more than anything else.