Andrew Rohan, a Sri Lankan national was repatriated to his home country by his company. He was sent by a private jet that was arranged by his company after he fell unconscious due to brain hemorrhage.

He was under treatment for two months. After two months the company planned to send him back to his country.

Rohan belonged to Kadawatha Sri Lanka. He was employed at Gulfwest Company Ltd in Saudi Arabia. He was ill and was hospitalized for two months after which he fell unconscious due to brain hemorrhage. 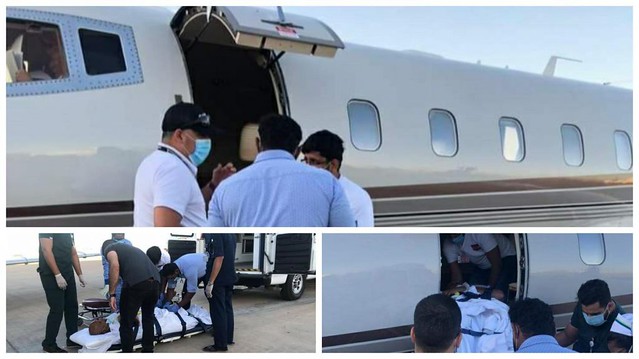 The family contacted the company in which Rohan was employed and requested to send him back to Sri Lanka. On the repeated request made by his family and as a humanitarian gesture, the Saudi Private Company planned to send him back by a private jet.

Hence the company repatriated its employee by a private jet accompanied by doctors and nurses.

Rohan arrived at the Bandaranaike International Airport at Katunayake. He has been placed under mandatory quarantine for a few days at a private hospital in Colombo. According to the family members, the patient is admitted to the hospital and will continue his treatment there.

A specialized team of doctors has been appointed to assure his speedy recovery. The doctors have assured that with appropriate treatment, Rohan will be able to recover very soon. He will be able to talk and walk again.

The cost spent by the company to repatriate Rohan

Gulfwest Company Ltd has spent nearly SR 300,000 to repatriate their employee through a private jet. The family extended their gratitude to Mr. Idris Mustafa, the owner of the Gulfwest company Ltd and his team for their humanitarian gesture.